via Mirror:
A boy of four allegedly starved to death by his mum was so thin he was dressed in baby clothes when police found him, a court heard yesterday. Amanda Hutton kept tragic Hamzah Khan’s “mummified” corpse in her bedroom for almost two years after he died, jurors heard. And in the hours following his death instead of calling the emergency services, the 43-year-old ordered a takeaway pizza, it is alleged. 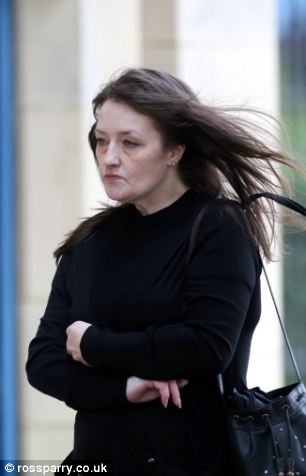 She also carried on claiming child benefit for the dead infant, the court was told on the opening day of her manslaughter trial. Prosecutor Paul Greaney QC said experienced officers who found the ­youngster’s decomposing body – lying in a cot next to a teddy bear – were left severely distressed by the sight that greeted them when they arrived at former care assistant Hutton’s home.

The lawyer said: “How had a child starved to death in 21st century England?

“The prosecution case is simple… Amanda Hutton failed to provide her child with the ­nourishment that he needed to survive and, in so failing, she killed him.

“Hamzah’s growth had been stunted because he was malnourished over a lengthy period and that state of affairs had resulted in his death. In short, he starved to death.

“She made no call for ­assistance, for a doctor or an ambulance. What did she do? Within hours she was ordering a pizza.”

Hamzah was discovered on September 21, 2011, at his home in Bradford. He was dressed in a babygrow (onesie) designed for a six to nine-month-old child. The youngster died on December 15, 2009, jurors heard. Hamzah’s body was discovered after “conscientious and ­tenacious” Police ­Community Support Officer Jodie Worsley was alerted by a ­neighbour complaining dirty nappies were thrown into his garden, the court was told.

When Hutton opened the door, the officer noticed a smell coming from inside the house. She called social ­services and senior colleagues, who arrived soon afterwards.

The court heard conditions were ­“overwhelming” with a “huge amount” of rubbish, faeces, rotting matter and empty bottles.

There was evidence, to suggest, that Hutton had suffered domestic violence at the hands of the child’s father, her former partner Aftab Khan, who lives at a different location. Hutton, told the police she had started to drink a bottle of vodka a day after her son’s death, she previously worked as a care assistant and had undergone some first-aid training.

Mr Greaney said the discovery of the child was thanks in large part to the diligence of police community support officer, , who had spoken to Hutton and visited the house several times.

The recently recruited officer Jodie Worsley visited the house a number of times after complaints from neighbours, demonstrating a “conscientious and tenacious approach [that] would have done a seasoned detective credit”, said the prosecutor.

Dead flies covered the windowsill, and when Worsley looked through the letterbox of the house “she could see nothing, but the smell from within made her gasp for breath”, he said.

When Hutton opened her door, officers “were not persuaded by Amanda Hutton’s claim that all was well”. He said: “On the contrary, they were concerned by Amanda Hutton’s appearance because flies were hovering all around her and by the terrible smell emanating from the house.”

Greaney told the court that as Hutton was being taken to the police station a police officer said to Hutton: “You know what’s been found, don’t you Amanda?” The jury heard that she replied: “He died two years ago on the 15th December.” The case continues.
This is absolutely terrible. How can a child be starved to death in England in this day and age? What are your thoughts? Post your comments below.

Actors Emily Blunt and husband John Krasinski expecting their first child in just a few months’ time, a rep for...