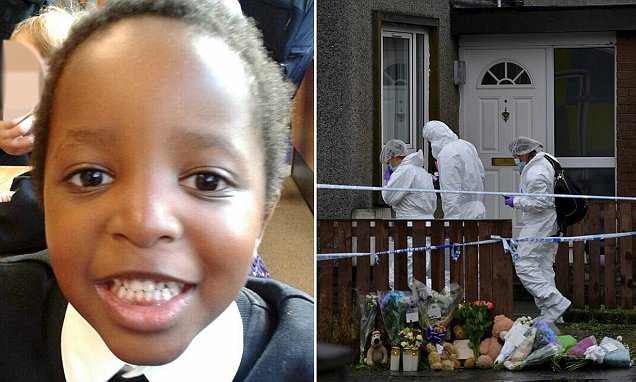 Updated: A five-year-old Scottish boy was found after suffering what one emergency services member described as a “sickening and violent death”. Police discovered Scott Chirashi at his home in Alva, Clackmannanshire. His mother, Farai Chirashi, 32, was being held as police launched a murder investigation. Police described the victim has having a “significant injury” to his body. Paramedics declared him dead at the scene. Emergency services personnel who dealt with the incident are being offered counselling.

Little Scott Chirashi was found with his heart ripped out in a suspected ‘ritual’ killing.

Dr Hendrik Scholtz, a South African expert in ritualistic murders, explained that human sacrifice takes place when people need to obtain supernatural powers to be successful in something like business or politics.

He said: “The person is sacrificed to awaken the supernatural force required to attain that goal.”

Chief Inspector Stephen Sneddon said: “On arrival, police officers found the child with a significant injury to his body and he was later pronounced dead at the scene by the Scottish Ambulance Service. Inquiries into the full circumstances surrounding this incident are ongoing and a woman is currently detained in connection with the investigation. We are not currently looking for anyone else and I want to reassure the local community that there is no risk to them. Police officers will be carrying out various inquiries in the area and I would ask the public to continue to give us the full support they have shown so far, to allow us to conclude these investigations as soon as possible and allow the area to return to normal. This is a quiet area and I would emphasise that this is a very unusual incident which poses no risk to others.”

Neighbour Victoria Thomson, lives across the footpath, said: “She moved there a wee while ago, maybe last year. They definitely haven’t been there long. She lived there with her two children. The wee boy was five but that is all I know. I don’t think she had a partner. I don’t if she was from Scotland. She was a really, really quiet lady. She always had her curtains shut as well. The only time I saw her was when she went up to the school and back.”

His mother, Farai Chirashi, 32, was detained by police and is due to appear in court tomorrow in connection with his death. It is understood she is being held under the Mental Health Act.

The family, who are originally from Zimbabwe, had lived in the town for years and moved to three years ago, along with Scott’s father, Tichakunda Chiriseri.

They were reportedly members of Alva Baptist Church before the couple separated a few months ago. It has been reported that Mr Chiriseri had joined a controversial religious organisation run by a self-styled prophet shortly before the break-up. The Stirling-based Agape For All Nations Ministries Internationals church is headed by former academic Dr Joseph Masocha, and describes itself as a ‘fast-growing church established in 2007’.

A spokesman for the church confirmed Mr Chiriseri was a member and said they were offering him counselling after his son was found dead.

He said: “It’s obviously a very difficult time. He had been a member of the church for months and we understand he wasn’t at the house because he had separated from his wife. I believe they split up a few months ago and she is not a member of our church.”

Tugce Albayrak was beaten to death for defending two women who were being harassed. Tributes are being paid in Germany...