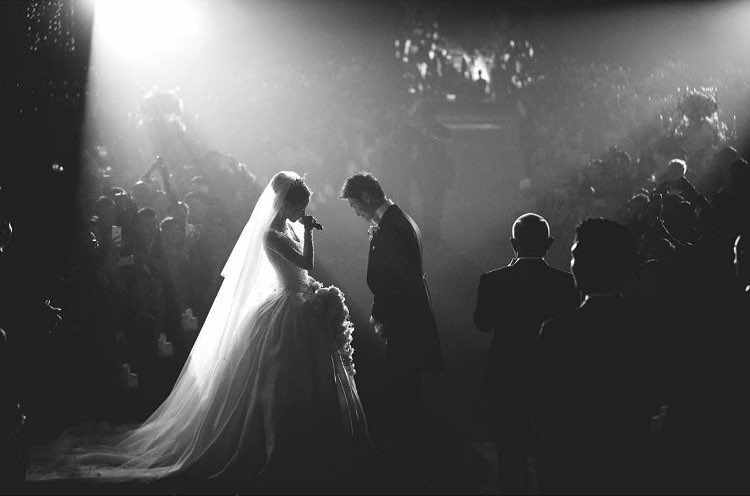 via Telegraph:
You may recognise Angelababy from the odd Dior front row. An actress, singer and model, she is dubbed the Kim Kardashian of China – however, the fact that she can act and sing makes her considerably more talented (sorry Kim).

But where she does mirror Kardashian is her fan following. Though she only has a measly-by-comparison 3.4 million Instagram followers to Kim’s 49 million, as of May 2015 she had 58 million on China’s version of Twitter, Sina Weibo.

Last week she married one of China’s leading actors, Huang Xiaoming, in a lavish ceremony at the Shanghai Exhibition Centre that is said to have cost £20 million. He is said to have an annual income of around £7 million, while she pulls in about £4 million. Not bad for a 26 year-old. It’s thought much of the day was commercially sponsored by various brands and companies, who received widespread exposure due to the live-streaming of the event over the internet.

2,000 guests attended the big day – which came five months after they officially wed in private – about 100 of them were fellow celebrities. They had a 2.5 metre cake fashioned to look like a carousel, which is said to have taken a month to make, and the entire venue was decorated with thousands upon thousands of roses to achieve Angelababy’s dream of getting married in a castle, apparently

Angelababy wore a full-skirted haute couture dress by Dior with organza sleeves and Chantilly lace bouquets that took five months to create and consisted of 115 feet of satin organza, 170 feet of tulle crafted into seven skirt layers, and a 10 foot long train. Dior detailed the creation process in its online publication DiorMag.com.

Prior to the day, the couple posed for official wedding portraits in Paris, where the bride wore a series of Elie Saab couture gowns. These images were beamed across various mega-screens inside the venue.

Each guest received a bag full of goodies, including a Meitu phone, a company Angelbaby represents.

Xiaoming sealed the deal with a six-carat Chaumet diamond ring, said to be worth £1 million, before performing an elaborately staged performance of one of his new wife’s favourite songs, Big Bang’s Fantastic Baby.

So, where’s that curious, sickly-sweet moniker from? The star’s birth name is Yang Ying, but Angela is her English name. At primary school she adopted the nickname ‘Baby’, allegedly because she had some puppy fat, so when she started modelling at age 14 she combined the two to make Angelababy.

She has already starred in 27 films – mainly Chinese, including a remake of Bride Wars – but will make her international breakthrough in Independence Day 2 opposite Will Smith.

Two girls, one of age five & the other two-and-a-half, have been gang-raped in separate incidents in the national capital,...