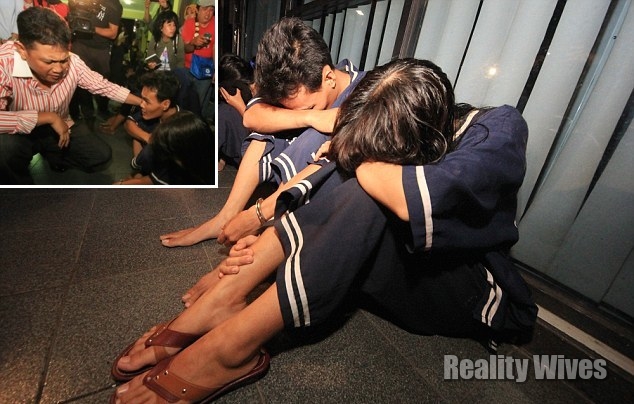 A newlywed Indonesian couple have been arrested over claims they participated in the murder of the wife’s suspected rapist and fried and ate the murdered man’s genitals, police said Tuesday.

The victim’s body was found in a burnt-out van after a suspected revenge attack sparked by claims from the new wife she was raped a week before her wedding on Sumatra island. The victim’s name is also known only as Rudi.

The husband, 30-year-old Rudi Efendi, has admitted murdering the man after discovering his wife was not a virgin on their wedding night in September and being told of the alleged rape, but insists he acted alone.

On their first night after getting married, Rudi said he found out that Nuriah was not a virgin. When he asked her to explain, she said that she had been raped by Rudi, whom she had previously dated, a week before their wedding.

“I was so outraged,” Rudi said after his arrest last month, adding that deciding to eat the victim’s genitals was ‘to cure my heartache’.

Police say that after murdering the man, Rudi took home the victim’s severed genitals, ordered his 20-year-old wife to cook them, and the pair then ate them together.

The victim was a driver, whom the wife used to date.

Sulistyaningsih, a local police spokeswoman who goes by one name, told AFP: “The case is still under investigation but we strongly suspect that this is a premeditated murder.”

The husband is accused of carrying out the murder, while police believe the wife acted as an accomplice.

The victim was found dead in early October in a burnt-out van in Tulangbawang district, Lampung province. Police later arrested Rudi and his wife.

Rudi had ordered his wife to contact the victim and set up a meeting, according to police. But when the victim arrived, he found only Rudi, who then allegedly stabbed him to death, cut off his genitals and set the vehicle on fire.

After hearing that, Rudi plotted Rudi’s murder. He asked Nuriah make an appointment to meet the victim in Penumangan Lama Village. Rudi then showed up instead and killed Rudi by stabbing him with a sharp instrument.He then mutilated the body, set the car on fire and went home to eat his unthinkable meal.

Despite his wife being arrested, Rudi insisted Nuriah was not involved in the killing and should not be held responsible for his crime.

“I did it alone. My wife was not involved,” he said.

A hero of the Paris massacre died after throwing himself in front of a bullet and saved a woman who...