In episode 2 of the Real Housewives Of Cheshire, Leanne shows us her new house and Dawn and her company are doing all the renovations. Leanne talks to Dawn about Seema’s party. Dawn reveals that she made a joke about Misse’s mole calling it a currant, she hopes that no one mentions the joke to Misse.

Stacey and Misse go shopping. Stacey tells Misse that Dawn called her a currant head. Stacey is hosting a dinner at her house and invites Misse. Misse is hoping for an apology from Dawn. What on earth was Stacey wearing? That jumper was hilariously ugly. 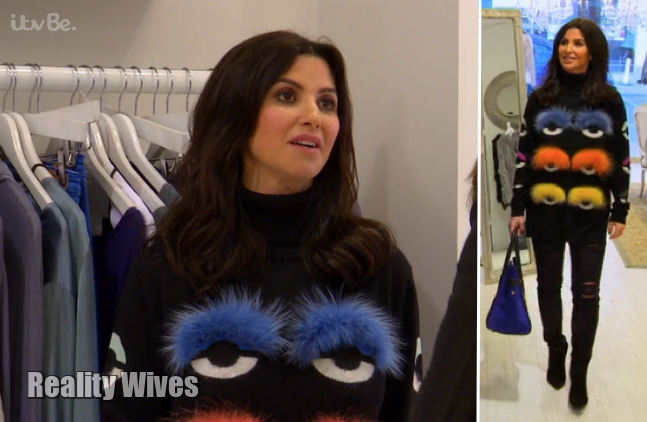 Dawn informs her daughter and husband that she said that Misse has a currant on her face, her daughter can’t stop laughing and her husband Ashley, isn’t amused by her antics.

Lauren has a facial and Tanya sits with her for company, she is unable to have any treatments done as she is pregnant. Lauren later meets Ampika for drinks to commiserate about her failing marriage, Ampika makes the conversion all about her and her wonderful divorce and subsequent happy relationship with her ex-husband Mark Pickston.

Seema has dinner with parents, husband and children, her mom asks her son if he wishes to have an arranged marriage, he balks at the idea. The family laughs at their stories of arranged marriages, love and food.

For some reason the wardrobes are sticking out like a sore thumb, on this episode. Continuing with bad fashions, 54-year-old Mark Pickston’s burgundy puffa jacket and ripped jeans.

Misse’s husband Anders is interested about her night out with the ladies. Of course she states that everyone was friendly towards her except Dawn and mentions her comments about her appearance.

Tanya is mulling over a water birth, but is worrying about sh*tting herself in the water and who will pick scoop out the poop.

Misse and Seema have dinner and drinks, Misse is thinking about starting a swimwear line and Seema thinks they could have a great partnership. Misse mentions that Seema looks great for her age, Seema was a little taken aback but quickly recovered. In her confessional she states she understood what Misse meant and didn’t take offense to her comment. Right.

Stacey is preparing the menu with her chef and discusses the problems some of the women are having. Why? She’s the chef.

Later, Seema arrives first, they discuss the Misse and Dawn situation. Was Stacey right in telling Misse about Dawn’s raisin comment? Leanne arrives second, Seema tells Leanne that Misse heard what Dawn had said – but Misse did not know – Seema lied to help Stacey’s ‘grassing’ to Misse seem more plausible. While they’re chatting, Tanya and Ampika arrive. Ampika is wearing one of Seema’s design’s without underwear, of course. Tanya can’t believe that Seema is ‘sticking’ up for Seema, as Tanya thinks that Misse loves herself too much. Misse arrives. 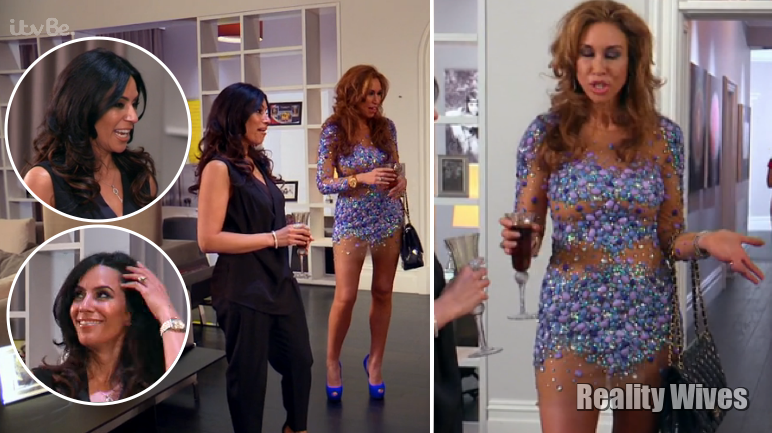 Misse, Seema and Ampika sit down on one side and talk about raisin face and Tanya and Leanne sit at the bar, Tanya exaggerates being over the raisin talk but is keenly listening to the conversation.

Dawn and Lauren arrive, how convenient. They head over to bar, not saying a word to the ladies on the sofa. Leanne informs Dawn on the raisin scandal, Dawn wants to know who told who.

The ladies sit down for dinner, Ampika says she couldn’t get enough sex when she was pregnant, Lauren pipes in, that the best orgasm is when you’re pregnant – this conversation popped up as, Tanya was asked how she was. Ok. Dawn and Leanne talk outside the dining room, before sitting, which doesn’t end well – Dawn is not too happy about Leanne giving her advise on how to handle Misse and her drunk comedic comments. Dawn greets Misse finally, but then decides to apologize to her just before sitting down. That should satisfy everyone right? Nope. Seema thinks that Dawn was controlling the conversation with her body language, Dawn could have been embarrassed and nervous no?

After Dawn’s apology, Stacey mentions that Dawn couldn’t even remember her name and that Dawn was unfriendly. Dawn is a little bit unfriendly. This was a bit unkind for the host to mention this during her dinner in public. Misse thinks that Dawn was immature for talking about her mole.

Who is Tanya’s dentist?

Tanya can’t sit there anymore and blurts out that Misse can’t talk about Dawn as she insulted their accents. Misse states that the Cheshire accents aren’t charming. Bad idea Misse, you live in Cheshire, you must love everything about it!

I'm from the West Mids, the Cheshire accents are horrible! They sounds like farmers! #RHOC @RHOCheshire

Some of the Black Country accents are like nails on a chalkboard, same with Cheshire lol #RHOC @RHOCheshire

Lauren agrees with Misse. Misse continues on and states that Manchester and Liverpool accents are rough, [insert air raid siren]. This is what makes Tanya walk out, this is the defining moment of Tanya’s fury – someone doesn’t like her accent. This can’t be the first time she has heard this. Don’t blame your pregnancy for your inability to accept not everyone is in love with the Cheshire dialect.

Next Week “Diva’s Dancing”:
Lauren heads off on holiday without Paul, while Ampika’s feelings for her ex grow stronger. Tanya turns to pregnancy yoga and the other women attend a diva dance class.