We came across this video of a man who many believe to be Paul Charles Dozsa.

He gained fame as “the restaurant runner” by local newspapers in 1988. He would dine at expensive restaurants and then claim to have lost his wallet, even feigning a heart attack and asking the restaurant to call an ambulance.

He was convicted after refusing to pay for his meals approximately 54 times!

Mr Dozsa pleaded guilty to the charges, saying he was “in a state of inebriation.” 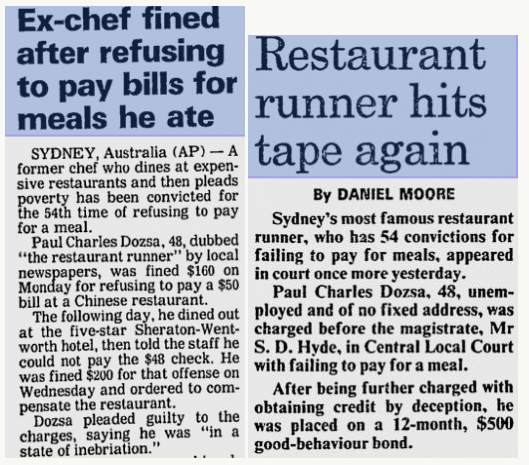 Here is a little more about Mr Dozsa found on OZ Chess:

Dozsa described himself as a Hungarian nobleman and was always very well dressed wearing a cravat etc and gave the impression that he was a person of wealth and owner of a string of high class restaurants.

In those days Dozsa stayed in the finest 5 star hotels(under a variety of names) in all Australian Cities but very consistently left before paying the bill. Dozsa regularly dined and wined in Australia’s best restaurants.

His knowledge of food and expensive wines was unique.
Of course from time to time he ended up in jail.

Every time he guaranteed to the magistrate that he was extremely sorry for his actions, complimented the restaurant as serving the best food and wine he had ever had – his stated remorse led to a lighter sentence. Dozsa considered himself as the most famous person in the world for not paying restaurant bills and he told everyone he met of his achievements. On a number of occasions I told him as did others that he was a serial pest and a menace to society.

His response was simple “everything you say is right – I agree it is very stupid – I have learned my lesson and he guarantees it will never happen again”. P.C.Dozsa was before the courts on at least 150 occasions but most offences never got that far. Dozsa had many excuses, my wallet is in the car or he made out a cheque which bounced, or he would say my name is Paul Dozsa I never pay my bills and I am broke, it is no use calling the police as you will never be paid. Not wanting a major disturbance in a quality restaurant he often was allowed to leave quietly by management rather than have an arrest.

Dozsa took great delight in telling everyone that he had perfected his crime. He would eat and drink then he said he was very ill and asked for an ambulance to be called. The manager would be very concerned of course and Dozsa was often taken to hospital.

He then recovered and of course had not paid the bill. He was caught one evening when the same ambulance driver picked up Dozsa and he was back in prison. Dozsa sometimes rented a luxurious apartment paying some advanced rent, hired expensive furniture, sold it and disappeared. The list goes on and on – including the TRG matter.

After a number of years a new excuse he explained to magistrates was that the Hungarian Army had implanted a device in his head which made him commit offences. This worked well for Dozsa as he was often sent for psychiatric assessment instead of jail. It was very sad that after referring to this on so many occasions that he was in fact convinced it was true.

Australia was invited to select one player with free entry and free international hotel accommodation as Australia’s official representative in the World Seniors Championship.

Mr Dozsa is a legend.

E.L. James’ Husband Niall Leonard To Write The Next 50 Shades Of Grey Movie

The 50 Shades of Grey trilogy author E.L. James has tapped her husband to write the film's sequel, according ......