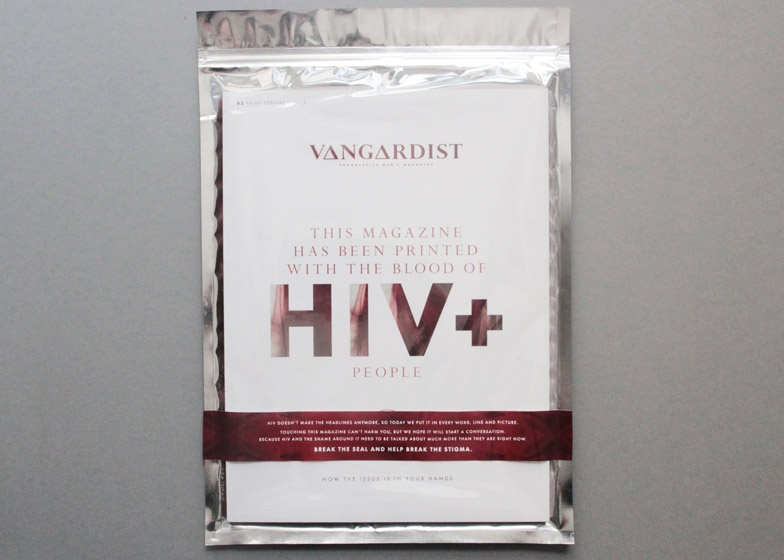 Austrian men’s magazine the Vangardist has printed a special edition using ink infused with the blood of HIV-positive people to raise awareness of HIV and AIDS.

It was designed to coincide with the Life Ball, one of the world’s biggest AIDS charity events hosted annually in Vangardist’s hometown of Vienna, the magazine has printed 3,000 special copies of its spring edition.

Vangardist teamed up with Saatchi & Saatchi Switzerland to find a way to use the magazine to trigger debate and raise awareness of the disease.

The ink in the special edition is infused with blood donated by three HIV-positive individuals – a gay man, a heterosexual man and a mother.

The edition is dedicated to celebrating “HIV Heroes” – people who live with or talk about the disease publicly, and support others who are HIV+ and features a text-only cover in contrast to the magazine’s usual cover image of a model. 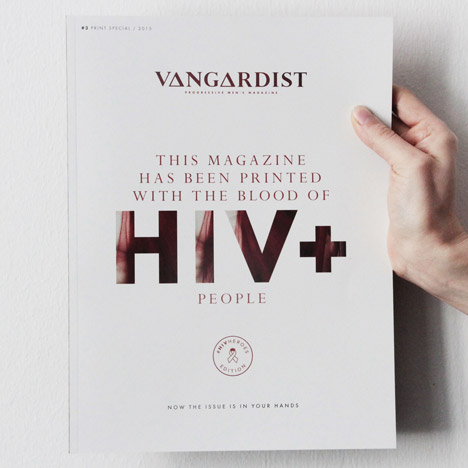 For the Vangardist’s standard edition of the HIV Heroes issue, 15,000 copies were printed with normal ink, the German-language magazine used a photograph of a model swathed in red fabric. This image was used as a background colour to create the letters HIV+ on the white cover of the blood-printed edition.

It is packaged in a plastic wrapper for legal reasons. 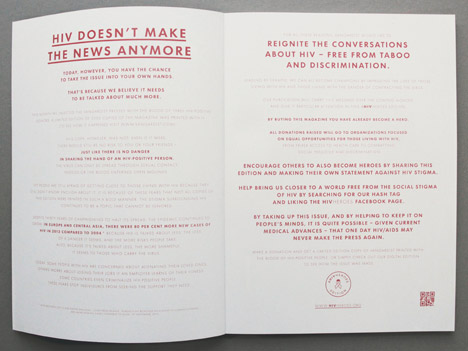 Jason Romeyko, global chief creative director at Saatchi & Saatchi says:
“We found donors through the Vangardist website and also through personal connections. We wanted to take the image of HIV patients beyond the gay stereotype. Hence the combination of a gay man, a heterosexual man and a mother add a deeper dimension to this. The legal restrictions advised us to not just distribute the magazine without a warning. There is nothing like a ‘restriction’ to heighten creativity. Hence the re-sealable wrapper which actually makes the communication so very much stronger. By adding a transparent re-sealable wrapper we added an additional moral dilemma. Do you avoid the issue because of ignorance or fear? Or do you break the seal and physically take the issue (the cause and magazine) into your hands. That way you break the stigma and are part of a solution.”

Errol Brown, co-founder and lead singer of the soul band Hot Chocolate, has died aged 71 after losing his battle...