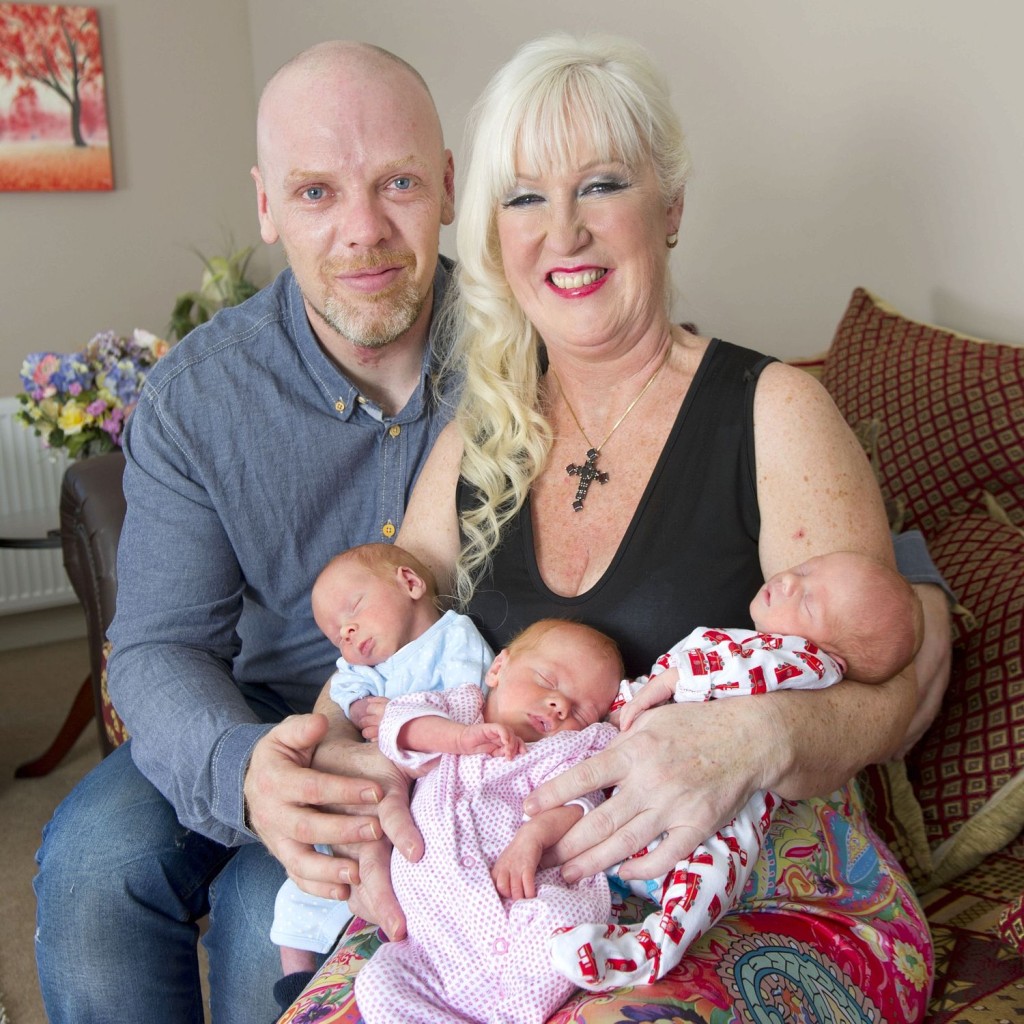 Britain’s oldest mother of triplets gave herself Botox injections before going into labour — to look at her best after the birth. Grandmother Sharon Cutts, 55, stated she also treated herself to fresh hair extensions.

Sharon, who is a nurse, revealed: “I’ve been trained by a doctor to administer Botox. I gave myself a dose while I was staying in the maternity ward for 11 weeks. I only injected a little bit, because really you shouldn’t do it while you’re pregnant.I sneaked out to get my hair extensions changed too. It was important to me to look my best for when the babies were born.”

Sharon and her boyfriend Stuart Reynolds, 40, have been celebrating the birth of their sons, Mason and Ryan, and daughter Lily.

Sharon spent £15,000 of loans on IVF to have a child with factory worker Stuart, who she met on a dating website.

Sharon, who is estranged from her husband and shares four children with him, Emma, 26, Sam, 23, Charles, 21, and Amy, 19, and four grandchildren says. “I knew there was a possibility of multiple births because the doctor put four embryos in me, for a higher chance of conceiving. At the scan we were told there were three heartbeats. Stuart was shocked and I was in tears, crying with joy. The first thing I thought was: ‘Oh my God, how am I going to cope?”

Stuart says: “I was excited, and then bricking it. Now they’re here I wouldn’t change it for the world.”

The couple, are from Boston, Lincolnshire, brought the babies home last week after the triplets were born on the 21st March. 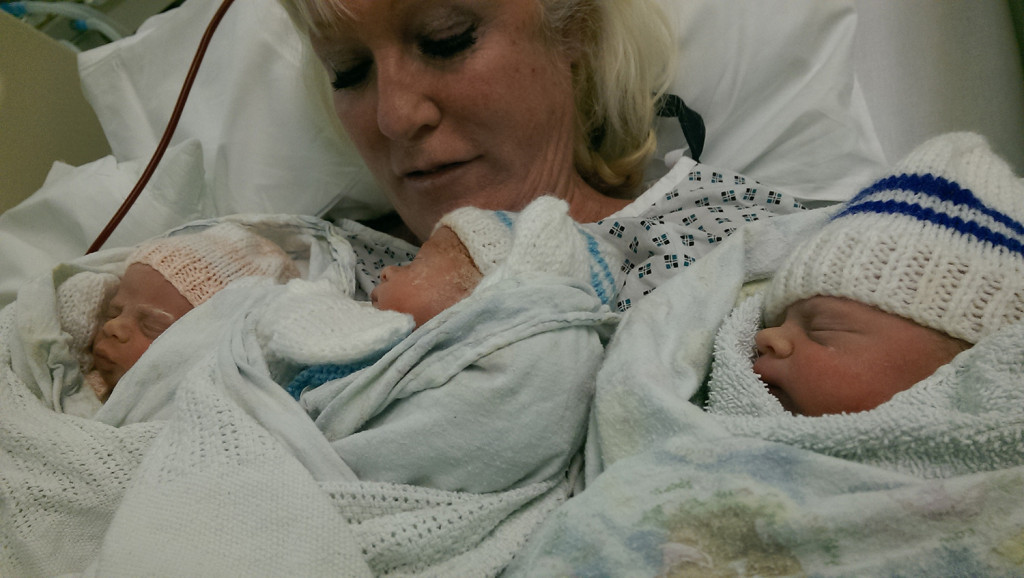 Sharon in the hospital with the triplets.

The couple are now faced with approximately 24 feedings and 21 nappy changes a day.

The pregnancy was high risk and Sharon had to spend 11 weeks in hospital to ensure the babies were delivered safely. Doctors even advised her to consider aborting one of the babies due to the dangers of pregnancy at her age. But she refused and the triplets were born by Caesarean section at Nottingham University Hospital. They each weighed between 4lbs and 5lbs.

Stuart says: “It was the most incredible and terrifying time of my life.”

The couple met four years ago, and Stuart who has no children of his own wanted to start a family, but Sharon had started menopause. Their only option was IVF.

In the UK the NHS will only provide the process up to the age of 42, so the couple had to resort to using a private clinic in London. 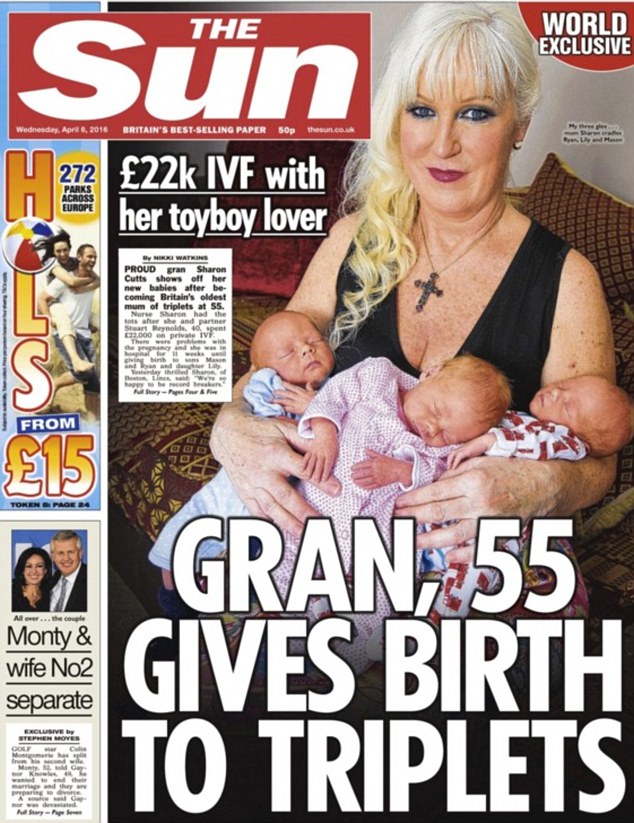 They paid £14,800 in December 2014 with a £10,000 loan and their wages, but were left disappointed as the nine eggs they had been donated from an anonymous donor did not survive in Sharon’s womb after two attempts.

They then flew to Cyprus for a third procedure, which was a success.

Sharon, who is married but separated from her husband of 24 years, said: “We got another loan out for £5,000 to try IVF again. We focused on Cyprus as they do IVF on people up to the age of 60. We chose an anonymous donor in July 2015, we picked because of her likeness to me from the description.”

Stuart says: “When they said they were going to put four embryos in I thought: ‘hang on, that sounds like a lot. They said the number would make it more likely to work, so we agreed.”

Sharon says: “Two weeks after the procedure I took a test at work and I was pregnant. I couldn’t wait to tell Stuart, who was over the moon. We both couldn’t believe our eyes when the scan a few weeks later showed we were having three babies. After the initial shock I was delighted. He said: ‘We can get rid of one baby, because of your age and dangers of multiple births. But I said no. If they took one away there’s a chance of losing the other two. The doctor claimed I was a high-risk patient, because of my age. If I wasn’t in the peak of health I wouldn’t have done it. I never put weight on and I don’t even have stretch marks.”

Sharon did not have an easy pregnancy and at 23 weeks started to bleed. She says: “I was convinced I was miscarrying and was rushed to a hospital in Sheffield. But the babies were fine.”

After staying overnight at Jessop Hospital she was moved to Nottingham, where she stayed until the births. She received a mixed response from her children.

She said: “One of my sons said I was too old and that I’d get fat. And my mum, Pauline, who is 74, thought I was far too ancient to get pregnant. My daughters have come to see their new siblings and are over the moon. My granddaughter Elizabeth understood I was pregnant, but is too young to realise it was with her aunt and uncles. I don’t care that my babies are younger than my grandchildren — it means they’ve got lots of playmates.”

The couple do not worry about the price of bringing up triplets on top of the cost of the loans. 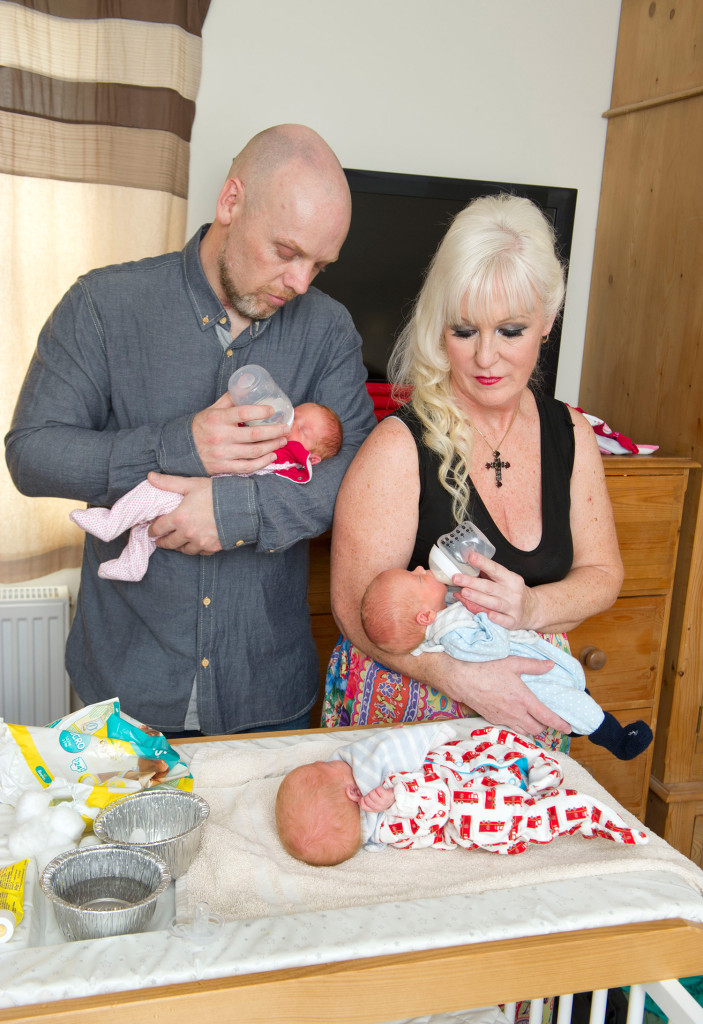 Sharon, a staff nurse at Pilgrim Hospital in Boston, insisted: “We both have good, well-paid jobs and work hard, so plan to have the loans paid off in the next couple of years. I need to be fit and stay as well as I can which I will. I spent 11 years in the Navy and ran four marathons. I know how to look after myself. I also have great family genes. My mum is 75 and healthy and my great-grandma lived until she was 100. I have longevity in my blood so there’s no reason why I won’t be around to meet their children. For all I know, Stuart could die before me because he smokes. But if I do go first I know the triplets are in safe hands, Stuart will look after them.”

She insisted: “I’ll keep up the Botox and getting my nails done. I want to look like Barbara Cartland when I’m in my 80s. I’m not going to let myself look like a granny. I’m young at heart, I’ve never felt 55. Up until I conceived I was going weight training and doing body-building. I worked four night shifts a week on the ward and would spend the rest of the time down the gym. There was no time for an easy chair in front of the TV. I don’t feel any different with tiredness than I did with my other children. A friend said I’m an inspiration to her mates who are older. They can’t believe what I’ve achieved. I say don’t give up, just try.”

Misse is shocked to hear the comments Dawn made about her, Lauren opens up to Ampika about her marriage &...