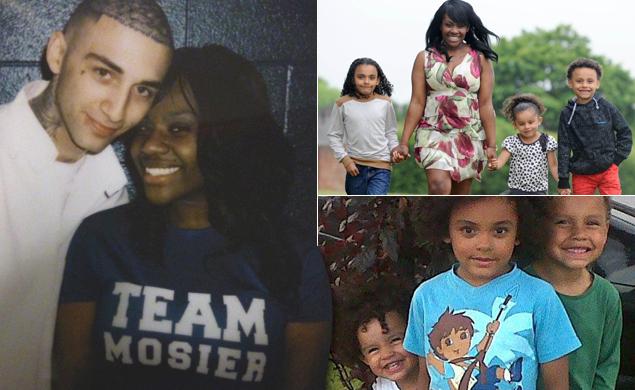 via Mirror:
Single mother Jennifer started writing to a criminal in a US jail two years ago. The pair were exchanging letters every day and eventually she flew to Texas to meet him. They fell in love and now hey are now engaged. The prisoner, Chris, is up for parole next year and Jennifer plans to marry him on his release

A British mother is leaving her three children to move to the U.S. to marry a violent prisoner.

Jennifer Butler, 29, says she is moving to America to marry Christopher Mosier, 23, when he is released from prison in September.

That will mean her children, all aged under 10, will be brought up by their dad back in the UK.

She met Mosier – who is serving a 15-year prison sentence for armed burglary – on a prison penletter website.

Jennifer told The Sun: “Leaving my children is not an easy thing to decide to do. I know some people will think I’m abandoning them. But for me to do that, it must mean what I have with Chris is important.”

She claims that she is moving to the U.S. to start a new life for her children Tyler, eight, Tristan, seven, and Mia, four.

Speaking about her relationship with Mosier, she said that she was intrigued by him and admired how open he had been about his past.

Mosier was jailed for 15 years in 2009 for burglary of a habitation with deadly conduct and drugs charges.

She realised she was in love with him when he stopped writing to her suddenly and she felt heartbroken.

When he eventually resumed contact he told her that it was because Mosier’s prison had been on lockdown.

After that break, their relationship continued to grow and Jennifer’s children even drew pictures for his cell.

She visited him last October but because he had his visitors’ privileges taken from him following a fight they could ownly speak through a glass screen, The Sun reports. It was on the third visit that they got engaged.

She concluded: “I know he did a terrible crime but he’s a changed man. He’s going to make a wonderful husband and a brilliant stepdad to my children.”

The Real Housewives of Cheshire. Stepping inside the north-west's champagne-fuelled social circles ... more