Home » News » Wife Chops Off Cheating Husband’s Penis; Then Cut It Off AGAIN After Surgeons Reattached It

Wife Chops Off Cheating Husband’s Penis; Then Cut It Off AGAIN After Surgeons Reattached It

Fan Lung is shown naked outside of the hospital where he was being treated, beating up his wife, Feng, who chopped off his penis twice.

Feng Lung, 30, discovered her husband was having an affair she cut off his penis with a pair of scissors! Ouch! She then chopped it off again after surgeons reattached it. Feng is now facing jail after being arrested for causing grievous bodily harm.

Feng’s cheating husband and father of five Fan Lung, 32, had used his wife’s mobile phone to send his mistress Zhang Hung, 21, a sexy email from his home in the city of Shangqiu in central China’s Henan province.

But he forgot to log out of his account, his wife Feng saw the message and several others dirty messages and flew into a rage. She grabbed a pair of scissors, stormed into their bedroom where he was sleeping and cut off his penis.

Surgeons were able to reattach the separated member, but fuming Feng snuck into his hospital room and cut it off again and threw it out of the window.

This prompted the Feng to attack his wife and he was spotted naked and bloody attacking her outside the hospital.

A hospital spokesman said: ‘The first we were aware of what happened was when someone came into the reception area to say a naked man was beating up a woman outside the hospital. Staff rushed out to see what was happening and found the patient with blood streaming down his legs hitting the woman. He was stopped and the woman was taken in for treatment, and then we discovered she had chopped his penis off again.”

Doctors and police officers searched the area outside but did not find Feng’s penis. They believe it may have been taken by a stray dog or cat.

The hospital spokesman said: ‘The man had lost a lot of blood and was taken in for emergency surgery. He is now in a stable condition but is extremely emotionally distraught.” 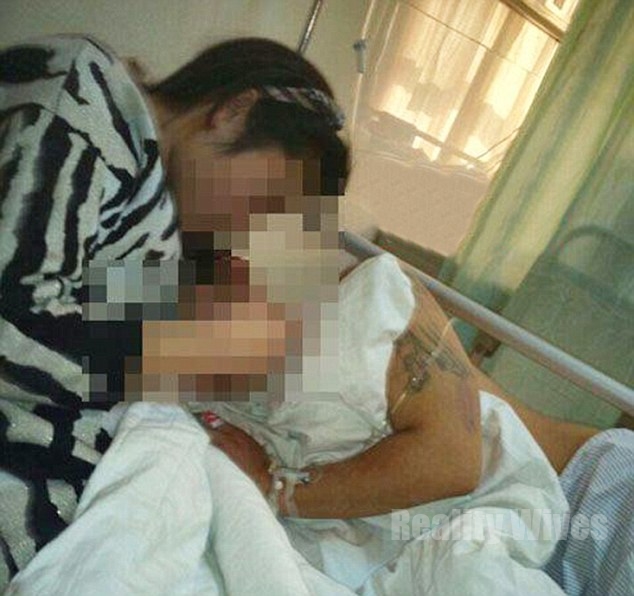 Fan Lung, is shown here with his mistress who wants to marry him even without his penis.

Fan’s mistress, who visited him at the hospital, said she planned to marry him as soon as she could.

“It doesn’t matter that he’s lost his fertility, he has five children already,” Zhang said.

Feng was discharged and is now under arrest for grievous bodily harm.

Twelve people were killed today when gunmen who claimed to be Al Qaeda terrorists carried out a massacre at the...