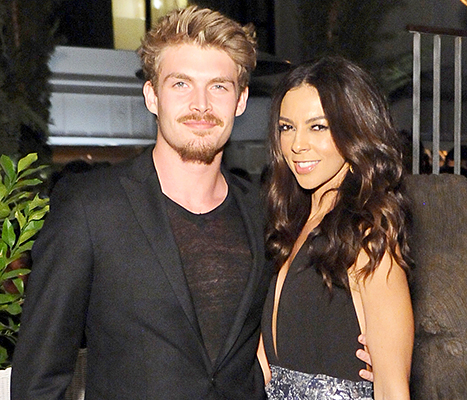 Terri Seymour is pregnant and expecting a baby girl! The Extra correspondent is expecting a daughter with boyfriend Clark Mallon.

“She is having a girl. I’m extremely excited and really happy to say, I’m pregnant. Clark and I are going to be a mummy and daddy,” Seymour’s rep tells Us of the TV personality, who announced to Extra last September that she was expecting her first baby with her British model beau.

The couple went on to detail their joyous baby news with Extra. “We were in the car and the doctor called, and he was on speakerphone. We both got to hear it at the same time and of course, I burst into tears. Clark couldn’t believe it.”

As for the reaction of one of her ex-boyfriend Simon Cowell? “His reaction was really sweet, extremely happy for me. Then he turned around to me and said, ‘Of course I obviously have to be the godfather.’ I was like ‘Okay,’ and he said, ‘I’m serious.’ It kind of makes sense since I’m [his son] Eric’s godmother.” Simon welcomed his first child last February with Lauren Silverman. He and Seymour still remain close friends.

Terri Louise Seymour was born in Buckinghamshire in 1973, she first was a commercial model appearing in catalogues and advertisements, as well as a video appearance on UK Rock Band Marillion’s “No One Can”, and as a dancer in Karl Keaton’s one hit wonder “Love’s Burn” from 1991, then became co-host of Wheel of Fortune on the British television network ITV in 2001.

In 2000, she appeared in NBC’s television miniseries In The Beginning featuring concealed frontal nudity for her role of Eve, and in 2002 played a small role in the British film 24 Hour Party People. She is also a correspondent on Extra and occasional reporter on ITV2’s The Xtra Factor and This Morning. In 2006, she made a guest appearance on The Tyra Banks Show as a judge in a search for the next top male model and played herself in the film Material Girls. She was diagnosed with Systemic Lupus and confirmed it in Grazia magazine.

Wife Chops Off Cheating Husband’s Penis; Then Cut It Off AGAIN After Surgeons Reattached It

Hell hath no fury like a woman scorned! Feng Lung, 30, discovered her husband was having an affair she cut...