Leanne’s 40th birthday party is here, the theme, “Studio 54, The 70s”. Leanne is still upset that she wasn’t invited to Seema’s Paris trip. 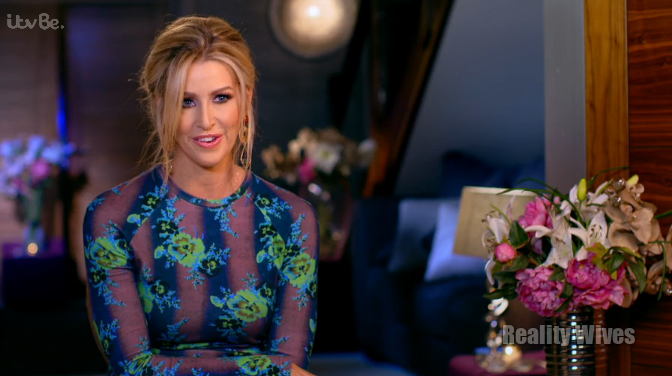 Lauren got a gig hosting at home shopping channel, Ideal World, for a product she has never used before. Paul Younane’s Neck Trainer. Really? Lauren did bring the comedy and did a good job. Ampika was there for support as Lauren realizes she is going to have to separate herself from her estranged husband Paul Simon, eventually. 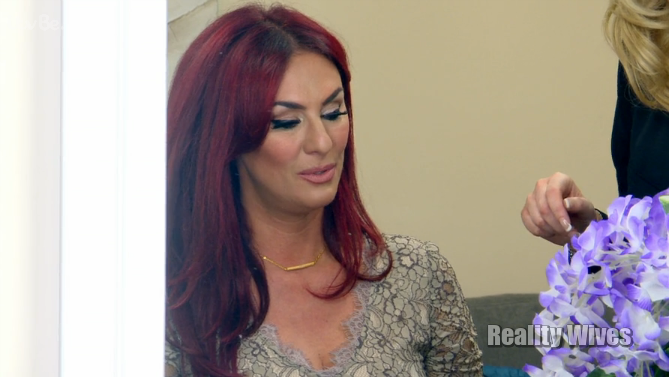 Misse’s sister Valentina is here to visit they discuss Ampika’s lack of fashion sense and how she looks older than her age. Misse tells Valentina she will be able to spot Ampika for the lack of her fashion sense at Leanne’s party.

Later Darby, Dawn Ward’s daughter says that most of her mothers wardrobe is from the 70s, as her clothes are drab and old looking. Leanne and Tanya both think this also. I actually think Dawn dresses appropriately to be honest.

Ampika’s outfit to Leanne’s party is her naked body covered in body glitter.

I wouldn’t be too happy if anyone wore this to my event or party. No. Everyone was shocked that Ampika would dare come outside like that. Leanne walks in and looks absolutely fabulous.

Leanne keeps on bringing up Paris. She really want to go. Leanne gives a speech after Dawn get’s everyone to shut up by shouting, “Everyone shut your gob!” Wes gifts Leanne a handbag, inside the handbag is a huge diamond ring, Leanne seems underwhelmed. She claims she was too drunk to cry about it. She says, “Wes is so romantic, for once”. Hmmm.

Leanne brings up Paris again, this time to Seema. Can Leanne stop this, it’s beyond embarrassing at this point.

Leanne and daughter Hallie do their dance sequence. Stacey gifts her painting of ‘blue’. It was a nice idea, I give you an ‘A’ for effort Stacey, but what was it but a collage of blue. Stacey then states it will be expensive to frame it. Why didn’t Stacey frame this blue mess for the birthday girl?

Misse see Ampika talking to Dawn’s husband and said Ampika couldn’t talk to Anders unless she was there. Misse is obviously tipsy. But I can understand where she is coming from. Ampika is naked most of the time whenever Misse has been around and she has no inhibitions.

Ampika’s gift to Leanne is a private jet to Paris. Leanne is ecstatic, but she wishes that she was going with Seema’s group.

Leanne tells Tanya that she has met with divorce lawyers. Tanya is shocked.