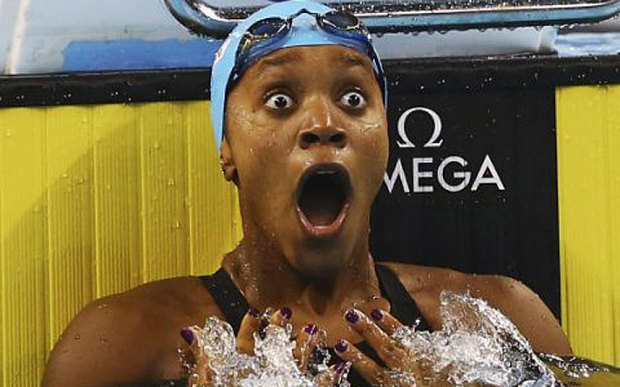 via Telegraph:
Alia Atkinson became the first black woman to win a world swimming title when she triumphed in the 100m breaststroke at the world short-course championships in Doha on Saturday as more records tumbled.

Jamaican Atkinson, 25, claimed the title and equalled Ruta Meilutyte’s world record of 1min 02.36sec in the process – although under governing body FINA rules this still equates to a new record.

Meilutyte appeared on course for a successful defence of her title only for her rival to move on to the Lithuanian’s shoulder at the final turn.

Atkinson then clawed her way down the final length before out-touching the 17-year-old by 0.10sec.

She was completely unaware of what she had done, staring up at the scoreboard with an air of resignation before it gradually dawned.

“Me?,” she mouthed, pointing at herself before the enormity of her achievement was absorbed and so started the celebrations.

She told AFP: “I couldn’t believe it! It came down to the same thing as the 50 and on the 50 I got out-touched so in my mind I went straight back to that.

“I just thought ‘oh okay’ and looked up at the board and it didn’t really click yet and then it really started to click. It took a while!”

Atkinson’s role at the International Swimming Hall of Fame in Florida is to encourage greater involvement of different communities in swimming and to promote water safety.

“Hopefully my face will come out, there will be more popularity especially in Jamaica and the Caribbean and we’ll see more of a rise and hopefully in the future we will see a push,” Atkinson mused.

A five-year-old Scottish boy was found after suffering what one emergency services member described as a "sickening and violent death"....