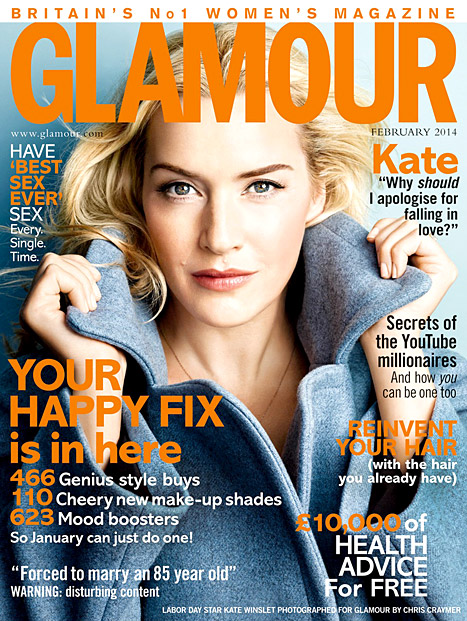 via People:
Kate Winslet‘s announcement that she was expecting a baby with husband Ned Rocknroll proposed a very popular question: would there be a new little rocknroller in the world?
But the actress, who welcomed son Bear on Dec. 7, tells Glamour U.K. that, despite the speculation, there was never a choice to be made when it came to her baby boy’s last name.

“We haven’t ever really had that conversation; it was always going to have my name,” Winslet, 38, says. “Of course we’re not going to call it Rocknroll. People might judge all they like, but I’m a f—— grown-up.”

Winslet adds that her children from previous relationships, Mia, 13, and Joe, 10, “have it as part of their name, so it would be weird if this baby didn’t.”

The mom-of-three is well-aware of the fact that her decision to wed for a third time and welcome a third baby did not sit well in the press. However, despite the criticism, Winslet refuses to defend her choices.

“No one has a right to comment on anyone’s life or the choices I do or don’t make. It’s very easy to be judgmental until you know someone’s truth. People have no idea at all,” she says. “It baffles me, truly, that you can publicly treat a person like that. It’s not very nice.”

Winslet adds, “I’m really sorry to the nation’s press that I fell in love and got pregnant; I do apologize if you deem that irresponsible.”

Maximillion Cooper and rapper-actress are engaged. Eve’s rep tells E! News, that Maximillion propsed on Christmas Day, the ring is...