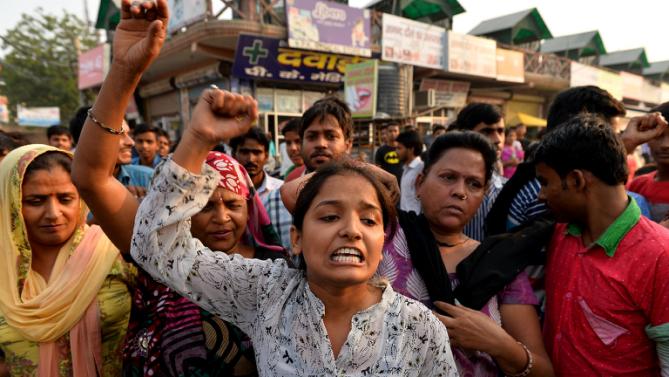 Angry crowds gathered Saturday in New Delhi to accuse police of failing to act over the rape of a toddler, with outrage mounting after the gang-rape of a five-year-old girl in a separate attack.

via The Hindu:
Two girls, one of age five and the other two-and-a-half, have been gang-raped in separate incidents in the national capital, adding to its notoriety as the “rape capital of India” and kicking up a political storm over law and order.

The rapes triggered another round of war of words between the Delhi government, led by the Aam Aadmi Party, and the Delhi Police, which come under the Union Home Ministry.

The five-year-old girl was raped in a building where she lives with her parents at Anand Vihar in East Delhi on Friday evening. She was found severely bleeding and rushed to Dr. Hedgewar Hospital, which referred her to GTB Hospital. Her father said on Saturday that her condition was stable.

The other child was abducted and assaulted by two suspects, using the cover of a one-minute power outage. They abandoned her in a park at Ranhola in West Delhi.

The rape of the five-year-old came to light when she ran out of the building bleeding around 5.30 p.m. on Friday. “She mentioned the name of one of the tenants in the building. Local people entered his room to find three men drinking,” Rajeev, a neighbour, said.

The three were dragged out and thrashed by the residents before someone called the police. DCP (East) B.S. Gurjar said the accused — identified as Prakash, Sitaram and Revati — were rescued by the police and placed under arrest after medical treatment. They have been remanded in judicial custody till October 30.

Meanwhile, attracted by a song playing in the nearby Ramlila ground at Ranhola, the two-and-a-half-year-old let go of her grandmother’s hand and rush towards the park, according to family members.

But barely a few steps from her house, she was picked by the alleged rapists on a motorcycle. Though the police confirmed that the child seemed to have been abducted while policemen were present nearby at the time of her abduction, they could not sense anything amiss because it was dark.