Update: At least 120 dead in series of terror attacks 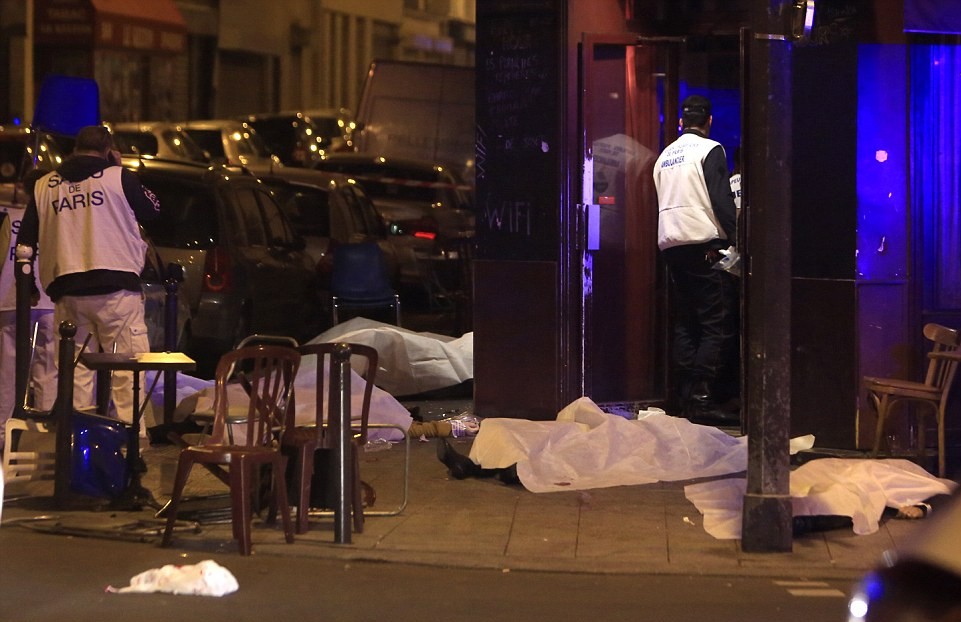 via Daily Mail:
A series of coordinated terror attacks in the heart of Paris have left at least 60 dead and paralysed the French capital with fear.

An attacker has been arrested and claims to have been recruited by ISIS alongside three other extremists, it has been reported.

At least 11 were killed in a restaurant shootout and another 35 at the Bataclan concert hall where terrorists were holding around 100 people hostage.

Police have since launched a successful raid on the theatre, killing two terrorists and freeing the hostages, French media has reported.

Just five miles away, two suicide bombers blew themselves up outside the Stade de France sports stadium where the French football team was playing a friendly match against Germany.

Terrorists launched a total of six coordinated attacks at high profile sites including the Louvre art gallery, the Pompidou Centre and Les Halles shopping centre tonight – all of which have been threatened by extremist groups in recent months.

Witnesses have been telling of the horror which unfolded inside the Bataclan theatre, where AK47 wielding terrorists who shouted ‘Allah Akbar’ as they burst in and opened fire into a crowd of thousands.

They shot at ‘very young’ people in the violent attack which lasted around 15 minutes, said Julien Pearce, a journalist at Europe 1.

One man said: ‘The men came in and started shooting. Everyone fell to the ground. It was hell. I took my mum, and we hid. Someone near us said they have gone, so we ran out.’

Gilles Avel, who was at the Bataclan where the band Eagles of Death Metal were playing, said: ‘We are all terrified, and have been told to get away as soon as possible.’

‘Three men with Kalashnikovs and wearing flak jackets burst in in the middle of the concert,’ another man, Hervé, told the Telegraph after escaping through an emergency exit.

He said the men were in their 20s or 30s and were not wearing masks, adding: ‘They just started spraying bullets. I saw a girl hit right in front of me. There must have been quite a few dead.’

A statement on Eagles Of Death Metal’s Facebook page said: ‘We are still currently trying to determine the safety and whereabouts of all our band and crew. Our thoughts are with all of the people involved in this tragic situation.’

The two explosions in a bar near the Stade de France stadium were detonated by suicide bombers, it has been confirmed.

A witness said the explosions were loud enough to be heard over the sound of cheering fans. Sirens were heard immediately and a helicopter was seen circling overhead.

Players briefly stopped in their tracks when they heard the twin blasts. Following news of the attack, thousands of fans – too scared to leave the stadium – poured onto the pitch. Machine gun fire and screams were heard from inside a restaurant on Rue Bichat at around 9pm

An AK47 gunman attacked a Korean restaurant in the Bastille area of the city, while grenade blasts were also heard.

Police and other emergency services are at the scene, which is close to where the Charlie Hebdo attack happened in January.

Images posted online showed the cracked windows of what appeared to be the restaurant under attack.

Dozens of people were standing outside their cars on the junction opposite and the lights of police cars could be seen above them.

Eyewitness Ben Grant, who was in a nearby bar with his wife at the time, said he saw six or seven bodies on the ground.

He told the BBC: ‘I was told people in cars had opened fire on the bar. There are lots of dead people. It’s pretty horrific to be honest.

‘I was at the back of the bar. I couldn’t see anything. I heard gunshots. People dropped to the ground. We put a table over our heads to protect us. We were held up in the bar because there was a pile of bodies in front of us.’

France has been on edge since ISIS extremists launched a bloody attack on the satirical newspaper and a kosher grocery that left 20 people – including the three attackers – dead.

Four Jewish shoppers were also murdered in the same set of attacks inside a Kosher supermarket in nearby Vincennes.

The French capital has been on a high state of alert ever since, with security services warning that another attack was always likely.

Since then there have been a number of more minor strikes or attempts. In one, three Americans and a Briton overpowered a heavily armed gunman on a train from Amsterdam to Paris.

ISIS’s online supporters have already started to celebrate the devastating attack in Paris, using the hashtag ‘Paris in fire’ on social media, but it has not been confirmed whether the terror group is behind the attacks. 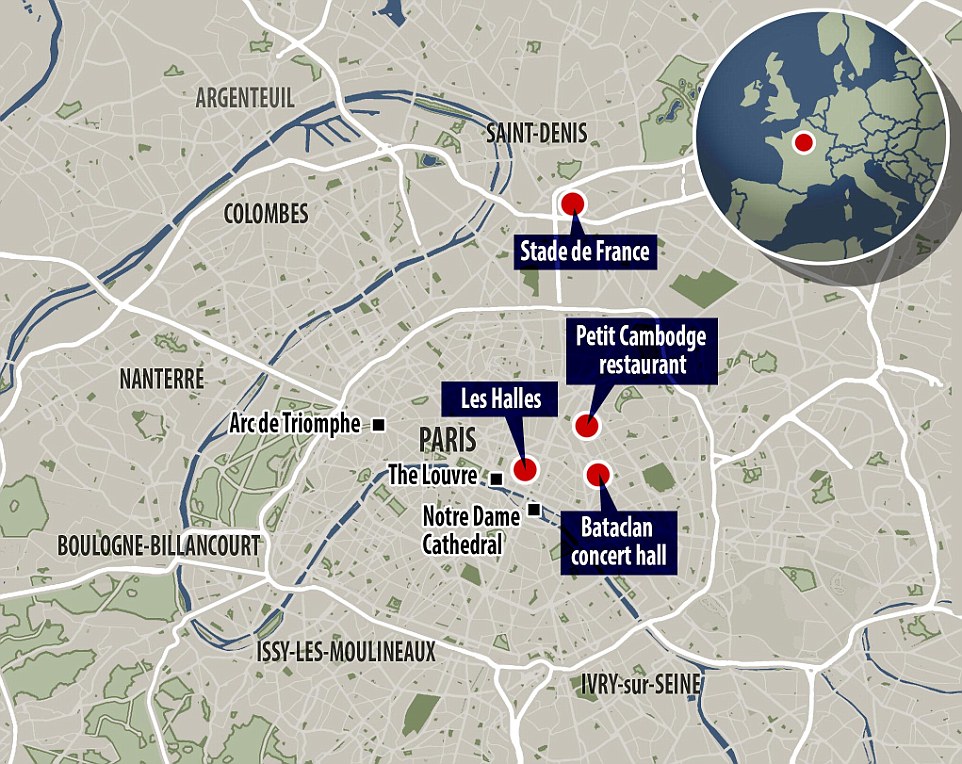 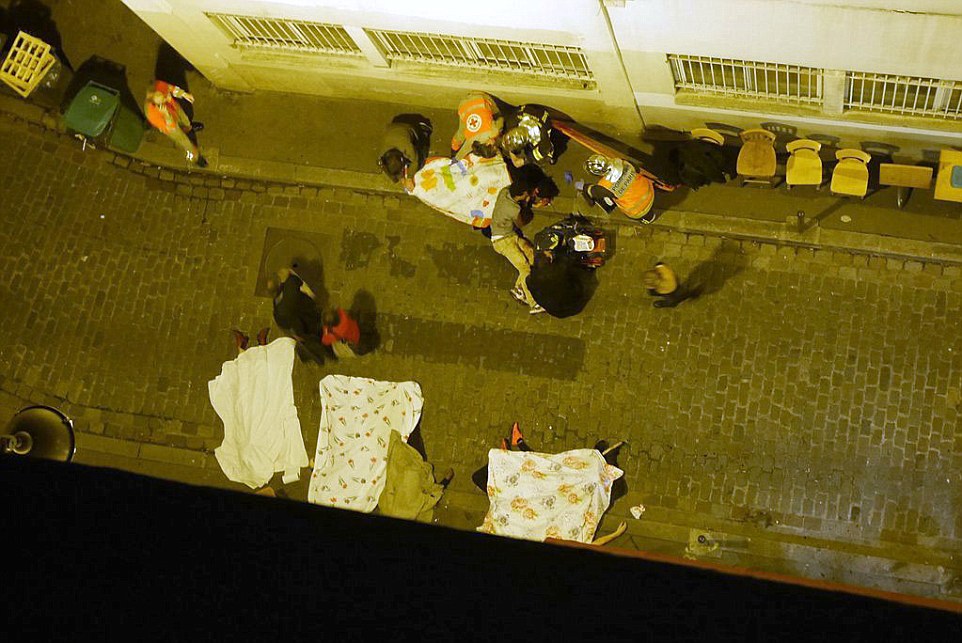 Bodies litter the streets in Paris 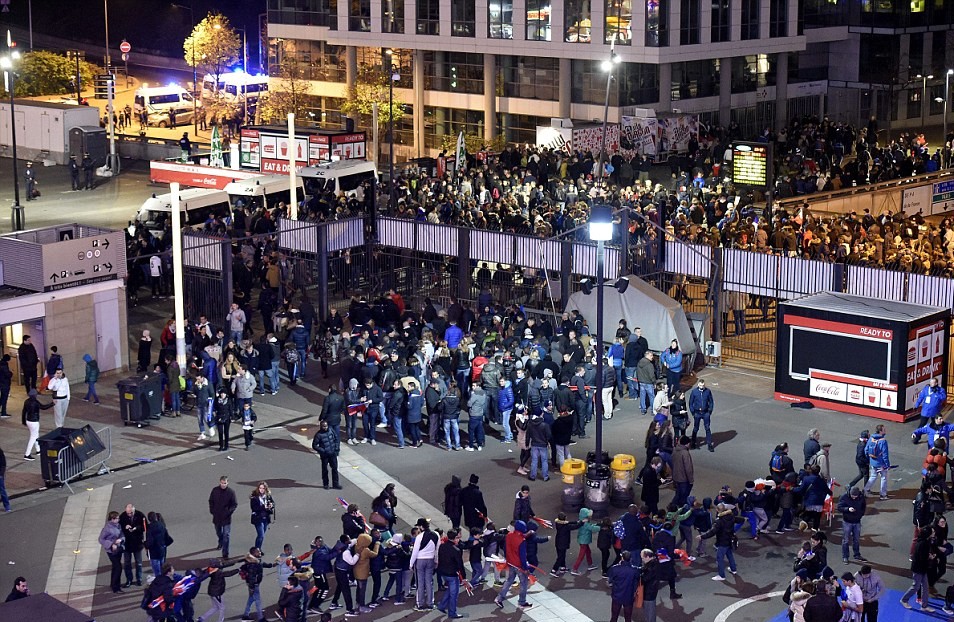 A stag* party reveller woke up after a big night out with a lifesize tattoo of a pair of Ray-Ban...