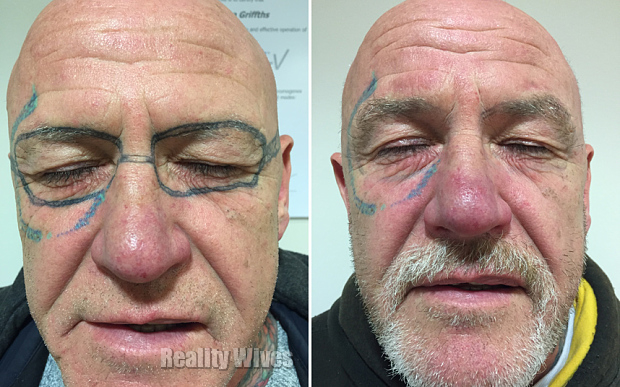 Man with his tattoo’d Ray-Ban’s

A stag* party reveller woke up after a big night out with a lifesize tattoo of a pair of Ray-Ban sunglasses inked onto his face. No really, he did.

The hung over party-goer first thought it was marker pen around his eyes until he tried to wash it off. Then he realised it was a permanent tattoo job all around his eyes – even with the word “Rayban” etched into his skin.

And now the man in his 50s has spent two years getting the tattoo lasered off his face. The man, from Swansea, South Wales, was on a stag weekend in Blackpool when he had the Ray-Ban tattoo as a drunken dare.

He said: “I had no memory of getting the tattoo because I had gone out celebrating and when it happened I was drunk. Waking up the morning after, I thought someone had used a permanent marker on my face. When I first came home, obviously I was subject to a lot of stares, but I kind of got used to the tattoo and decided not to get rid of it.” 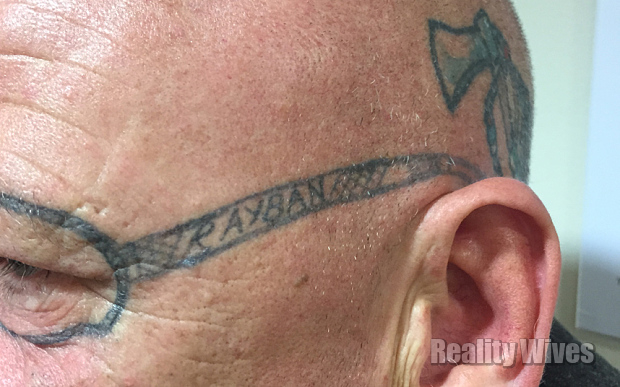 But on an evening out with friends he was confronted by someone in a pub who made fun of the tattoo.

He added: “The next morning I really started to think about what my family and friends thought. I didn’t want them to be embarrassed when they were out with me, so I decided there and then I was going to get it removed.”

The unnamed man went to 1192 Laser and Beauty Clinic in Swansea, South Wales, to have the removal. Owner Donnalee Alford said it was one of the worst tattoo blunders they had ever seen.

He said: “When I first met Donnalee I made it clear I was not sure if I really wanted the tattoo removed. I had seen some horror stories and some friends have scars in the place where they had tattoos removed. If there was a chance of scarring there was no way I was having it done.”

But he had the procedure carried out on a test patch and then booked a full course of treatment – but kept it a secret how much it cost to remove his blushes.

The man, who obviously doesn’t want to be named, had six treatments to make the tattoo now invisible to the naked eye.

“All I can say is that the whole process was amazing. There is no scarring, and when friends who haven’t seen me for months come over, they always notice something is different. When they realise the tattoo is gone, they are shocked about how well the treatment has worked.”

Donnalee, based in Swansea, said: “Tattoos have become more and more popular in recent years but research shows one in six people hate their tattoos and more than half regret having them done in the first place.”

Voice actress & singer Miyu Matsuki passed away from pneumonia complications on the 27th October at the age of 38....