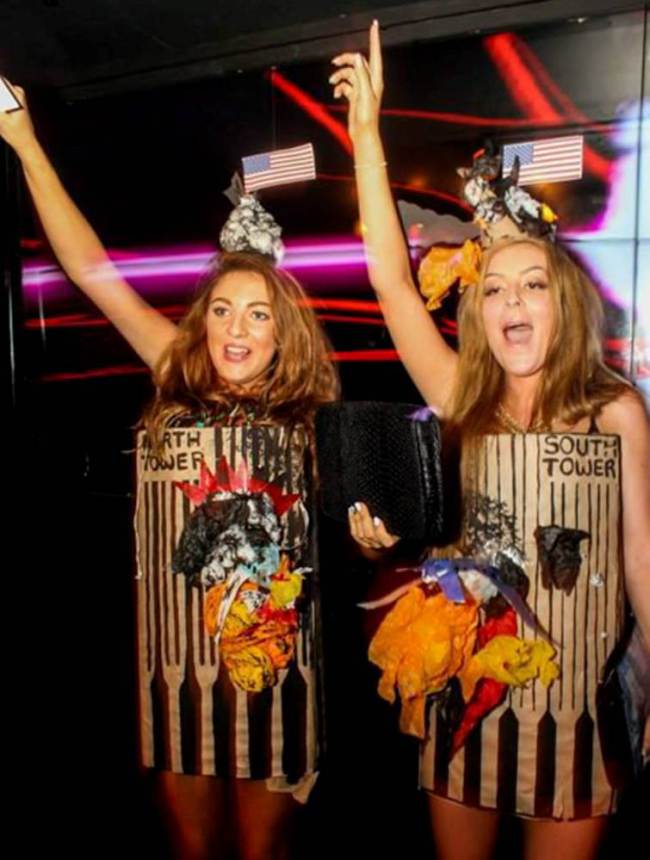 via Metro:
Amber Langford and Annie Collinge, both 19, were given £150 in shopping vouchers after winning a Halloween costume contest at Rosies nightclub in Chester.
Their matching outfits, which were labelled North Tower and South Tower, featured depictions of flames, explosions and planes hanging from windows.
Ms Langford and Ms Collinge, both students at Chester University, told the Sun newspaper: ‘We never meant to be offensive, but we apologise if any offence was caused.

‘The idea was to depict a serious, modern-day horror that happened in our lifetime and was not intended as a joke.’

Ms Langford’s father Martin, a pilot, said he was ‘not happy at all’ about the outfits.

‘She knows I’m a pilot and that’s not cool at all,’ he said. ‘We will be having a little chat, I think.’

Stonegate Pub Company, which operates Rosies, said the decision to award a prize to the women was a ‘serious error of judgment’ made by a DJ.

‘We apologise to anybody who may have been upset or offended by this,’ a statement said. ‘A full investigation by the company is taking place.’

The University of Chester and its student union said they ‘utterly condemn the appalling photos’.

‘Both organisations have begun an urgent investigation with a view to taking the necessary action,’ a joint statement added.