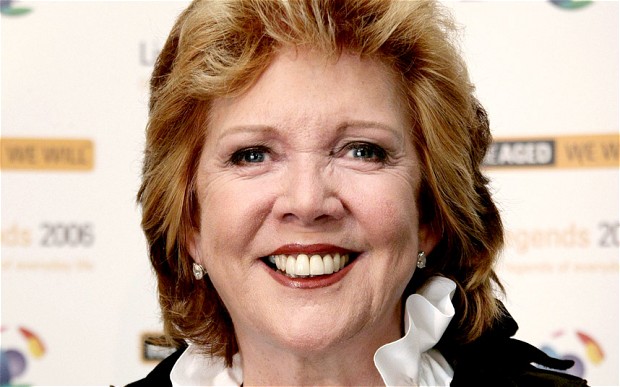 via Daily Mail:
Cilla Black was a 1960s pop star of the Beatles era who became one of the most highly paid and successful light entertainment performers in the history of British television.

Hers was a remarkable career by any standards. Few of the pop singers of that era lasted more than a decade in the limelight.

But Cilla, 72, whose rare talents were matched by a phenomenal capacity for hard work, remained in the public eye and at the highest level for approaching half a century.

She was born Priscilla Maria Veronica White on May 27, 1943 and was encouraged to sing by her family. In the early 1960s she got a part-time job as a cloakroom attendant at the famous Cavern Club in Liverpool where the Beatles regularly played.

She quickly impressed the Beatles and others with her talent, when she gave impromptu performances at the Cavern. At this time, she also worked as a waitress in the Zodiac coffee lounge, where she met her future husband and manager Bobby Willis.

Cilla was introduced to Brian Epstein by John Lennon who persuaded him to audition her. In September, 1963, Epstein signed her up as his only female client.

Her debut single, Love of the Loved, written for her by Lennon and McCartney, was a relative failure. But her second single the Burt Bacharach-Hal David composition, Anyone Who Had A Heart shot to Number One and became the biggest-selling single by a female artist in the history of British popular music.

This launched her on an extraordinary pop career, with 20 consecutive Top 40 hits on the British single and EP charts, including 11 British Top Ten singles and two consecutive Number One singles in 1964.

Her hits included You’re My World, Alfie, the theme song from the Michael Caine film of that name, and Step Inside Love.

Cilla’s pop career persisted until the end of the 1960s, by which time she was an internationally-acclaimed star, having notably successfully broken into the notoriously difficult United States market.

She branched into acting with 1964’s Ferry Across the Mersey, which featured Gerry & The Pacemakers, also out of Epstein’s stable.

But by August 1967, only days before his premature death, Epstein had engineered Cilla’s switch to television. It was a shrewd move and, largely through her own sheer drive, she remained at the height of popularity until the end of the century and beyond.

Her own variety show for the BBC regularly commanded staggering audiences of 22 million. So while her pop career was declining she was developing into the most popular figure on television.

It was this resounding TV success which was eclipsing her musical career, although she always said she preferred to be remembered for her songs than for anything else.

Cilla was awarded an OBE in 1997. In 2005, her autobiography What’s It All About? became a best-seller. She has been the recipient of many TV honours and awards.

Willis. her husband and manager, to whom she was married for over 30 years, died in the late 1990s.

She is survived by three sons, one of whom, Robert, succeeded his father as her manager.