Victoria Beckham tweeted a picture of her and husband David Beckham taken on New Year’s Day while on holiday in the Maldives.

In the black and white photo Victoria, 39, gives the faint outline of a smile as she puts her arm over David who always seems to have a grin on his face. 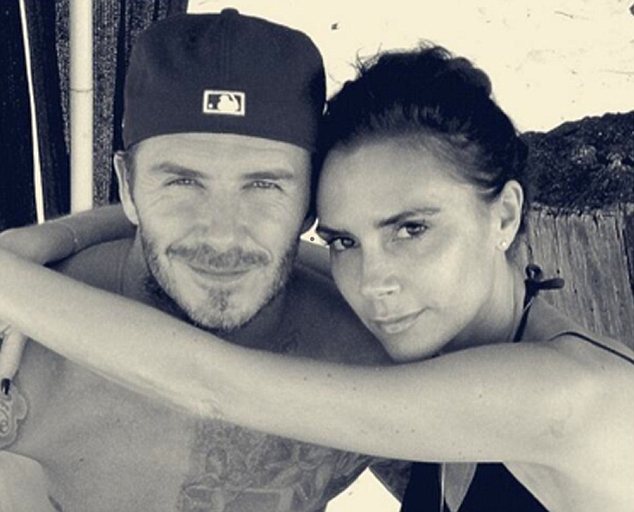 With the tweet, the mother-of-four wrote: ‘Thank you for all your lovely messages, we are so proud of you David x vb’

Earlier this week David announced his retired from football after 20 years in the sport.

David’s professional career began with Manchester United, making his first-team debut in 1992 aged 17. With United, Beckham won the Premier League title six times, the FA Cup twice, and the UEFA Champions League in 1999. He then played four seasons with Real Madrid, winning the La Liga championship in his final season with the club. In July 2007 Beckham signed a five-year contract with Major League Soccer club Los Angeles Galaxy. While a Galaxy player, he spent two loan spells in Italy with AC Milan in 2009 and 2010.

In international football, Beckham made his England debut on 1 September 1996, at the age of 21. He was captain for six years during which he played 58 times. He has 115 career appearances to date.

Beckham has twice been runner-up for FIFA World Player of the Year and in 2004 was the world’s highest-paid footballer when taking into account salary and advertising deals. Beckham was the first British footballer to play 100 Champions League matches. When joining the MLS in 2007 he was given the highest player salary in the league’s history of US$6.5m per year.

They’ve been dating for five years, but Naomi Campbell and Vladimir Doronin have reportedly hit a rocky patch in their...