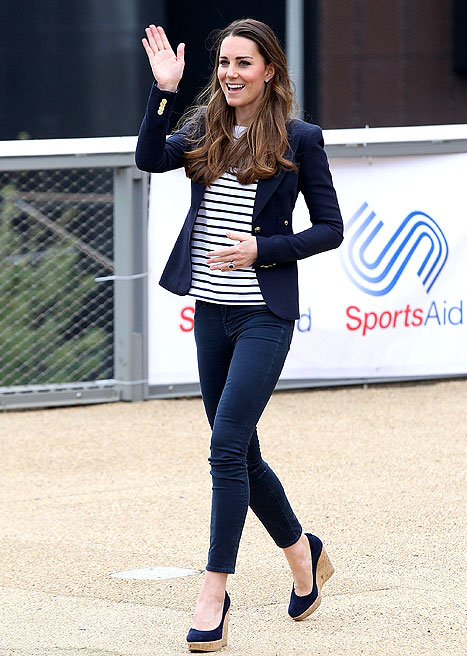 On Friday, 18th October, three months after giving birth to Prince George, her first child with husband Prince William, the Duchess of Cambridge attended a SportsAid Athlete Workshop at the Copper Box in London’s Queen Elizabeth Olympic Park, where she showed off her amazingly flat stomach! The Duchess arrived to show off her impressive volleyball skills in a Ralph Lauren breton-style striped top, a navy-blue military blazer by Smythe, cropped J Brand jeggings, and Stuart Weitzman for Russell and Bromley “corkswoon” wedges. Her signature brunette locks were down. After watching a few volleyball games, the Duchess said she would “try her best” and attempt to hit the ball around. However, she declined to fence or play badminton because of her wedges.

Still her wedges didn’t make much of a problem for the Duchess in her volleyball attempts! She managed to volley the ball over the net on multiple tries before dropping the ball on her final attempt. 18-year-old Toby French, a volleyball player from Chelmsford recalled “She was a natural. You can tell she’s sporty. She said she’s played a little before.” 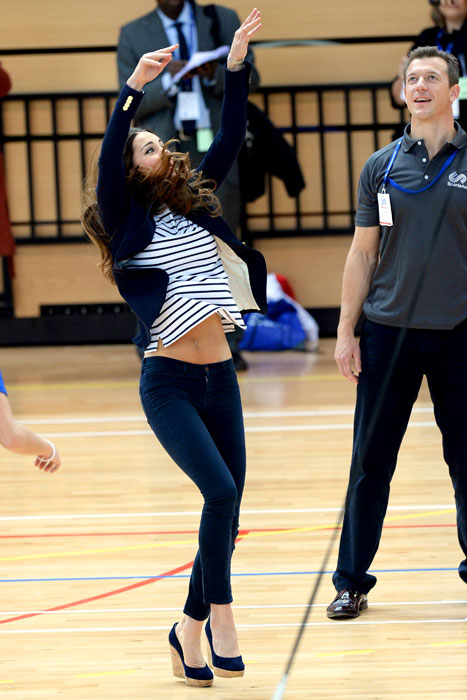 Following her volleyball game, the Duchess joined Olympians and Paralympians including Katherine Grainger, Ade Adepitan, and Karen Pickering to discuss media and nutrition with several players and their parents. Ade Adepitan had nothing but kind words to say about the Duchess revealing: “[The Duchess] was very keen to learn more about the difference SportsAid meant to these young players and asked whether we had any more players coming through as a result of last year’s games. I told her we had more than ever before. It’s been rermarkable.”

SportsAid, of which the Duchess is a patron, is a charity aimed at helping and recognizing young British athletes. The charity was founded in 1976 and has supported many talented athletes. In fact, it has supported two-thirds of the British team at the London 2012 Olympic and Paralympic Games. SportsAid’s chief executive, Tim Lawler said that “The thing that has really struck me is how keen she was to see what we did in action. We are a charity about people, not great buildings. Every penny we raise goes to the kind of people you see here. We always tell our young people that they are beautiful and inspirational, and now we can say that about our patron, too. She was very bright, very switched on, and she asked all the right questions. But more than that, she was very thoughtful and listened well.”

Husband Stabbed His Wife Of 24 Years To Death, She Joked About His Small Penis

John Clinton, 52, brutally attacked Paula Clinton, his partner of 24 years, before slashing his own throat in a bid...