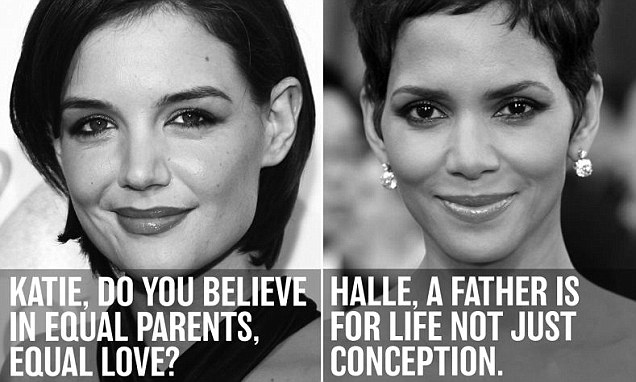 via Daily Mail:
Actresses Katie Holmes, Halle Berry and Kim Basinger are being targeted in a new ‘crummy mummy’ campaign by Fathers4Justice, which accuses them of denying their children access to their fathers. The pressure group is using the Hollywood stars in a series of adverts criticising their childcare arrangements.

The new controversy comes after actress Kate Winslet, who has three children by three fathers, last week threatened to sue for being singled out in a Christmas advert by Fathers4Justice.

Undeterred, the group says it will continue to highlight high-profile mothers who, they say, deny their children access to their fathers for no good reason.

The Katie Holmes poster features a large picture of the star and the headline: ‘Katie, do you believe in equal parents, equal love?’

Text on the advert reads: ‘Katie Holmes demanded sole custody of her daughter Suri in her divorce from Tom Cruise, limiting the time the actor spends with her.’

Last night Ms Holmes’s lawyer Jonathan Wolfe criticised Fathers4 Justice, saying: ‘The campaign is baseless and offensive. Katie will continue to have no comment on personal and private matters that affect her family.’ 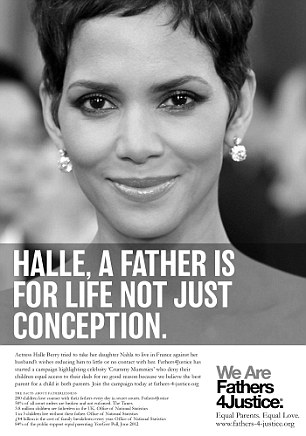 Another poster features a picture of Oscar-winning star Halle Berry with the headline: ‘Halle, a father is for life, not just conception.’ It reads: ‘Actress Halle Berry tried to take her daughter Nahla to live in France against her husband’s wishes.’

never hate your ex more than you love your child.’

The advert claims that Ms Basinger ‘fought’ with Mr Baldwin over his access rights to their daughter.

Baldwin blamed the stress of a seven-year custody battle on his decision to leave an angry voicemail message in which he called his daughter, then aged 11, a ‘rude, thoughtless, little pig’.

Last night a spokesman for Fathers4Justice said the crummy mummy adverts were part of its ongoing campaign against the ‘fatherless society’.

He added: ‘As an organisation we strongly believe in 50/50 shared parenting and are concerned that contact denial – where one parent denies a child access to the other parent, normally the father – is not only increasing, but is a serious human rights violation and an abuse of a child’s right to their father. 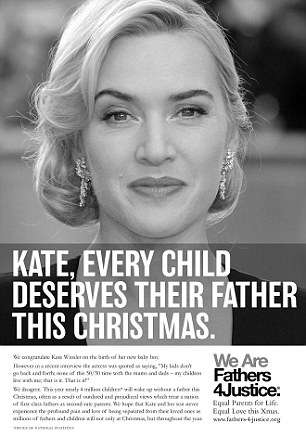 Peter O’Toole was an Irish actor of stage and screen. He attended the Royal Academy of Dramatic Art, and began...