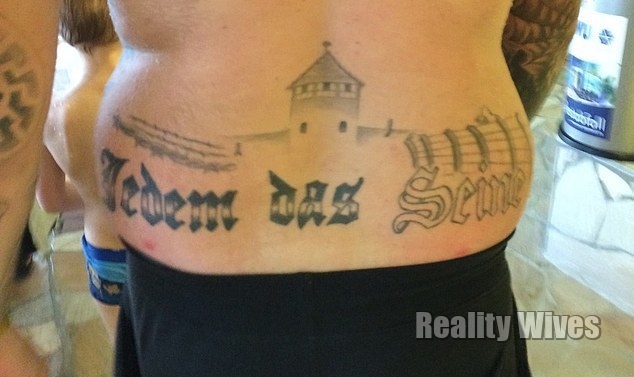 German councillor whose tattoo of the Auschwitz death camp and slogan Jedem das Seine, translated, ‘To Each His Own’, or ‘To each what he deserves’ was spotted when he went swimming gets a six month jail sentence.

via BBC:
A German man has been charged with incitement to hatred after he was pictured with a tattoo apparently of the Nazi death camp at Auschwitz.

The tattoo has the slogan “To Each His Own”, which was on the gate of the Buchenwald concentration camp.

The photo was taken at a swimming pool in the town of Oranienburg, north of Berlin, at the end of November.

German media named the man as Marcel Zech, (27), a member of the far-right National Democratic Party.

Mr Zech sits on the council in the district of Barnim in eastern Germany.

The trial process has been sped up, German media reports say, and is scheduled to start on 22 December.

Germany has strict laws against the promotion of Nazi ideology in Germany. The punishment for Mr Zech if he is convicted could be as much as five years in prison.

Artist Jonathan Meese was prosecuted in 2013 for giving Nazi salutes at an event the previous year, but successfully argued the gesture was part of an interview-turned-art performance and was acquitted.

The latest case comes after several violent incidents this year at reception centres for migrants in Germany.

A senior German intelligence official told the BBC in October that Germany’s decision to take in asylum seekers was fuelling a resurgence in the far right.