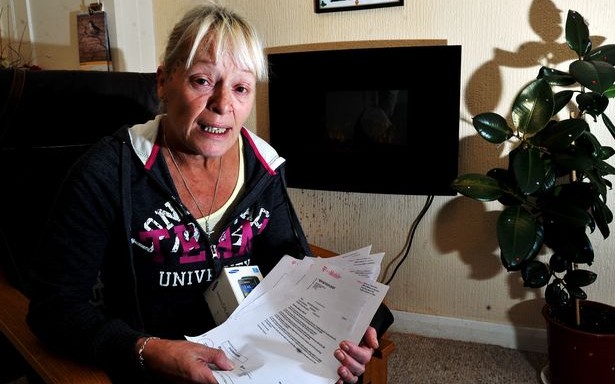 via Wales Online:
A grieving widow took her dead husband’s ashes into a mobile phone shop in a bid to have his contract terminated. But Maria Raybould has continued to receive bills from high street giant T-Mobile and even been threatened with bailiffs. Her loving husband, David, died of cancer on August 29 aged 57.

Before his death he was paying £26 a month for a Samsung Galaxy mini SII on a T-Mobile contract. Maria, from Tongwynlais, Cardiff, said: “The money that they are charging is for bills since he died. Everything was paid by direct debit before he passed away.

“David died on the Friday and the day after my son Craig went in to sort out the phone bill at their Caerphilly branch so it would be one less thing for us to worry about. They told him he would have to bring in David’s death certificate. He went back with the death certificate and they told him they would send a copy of it to head office.”

Maria thought that would resolve the matter but she has since received intermittent letters from the company demanding money.

She said: “It’s gone downhill since then. I’ve had texts since then asking if David wanted to pay an extra £2.50 for broadband and letters saying that bailiffs would be coming.”

Maria, 56, who is bi-polar and struggles with anxiety, said on her third visit to the shop in a bid to end the contract she even took her husband’s ashes into show the staff.

She said: “I’ve been up to the shop with the death certificate, with a letter from the crematorium, the funeral bills – even his ashes. I took in everything I could. I lost it in the shop. I gave them 20 minutes to sort it out. I went outside and had a panic attack and took some diazepam. When I went back in the girl told me she had spoken to the manager and they were going to stop the contract. Then I had another letter about the bailiffs. My son spoke with T-Mobile again and was assured it was an automated letter sent in error and that it wasn’t going to happen again.”

But on November 8 Maria received another letter addressed to her late husband from T-Mobile customer finance department. It asked for an overdue amount of £129.48 to be paid and threatened to apply a cancellation charge due for the remaining months of the contract as well as stating the account will be passed to a debt collection agency.

Maria said: “Now in my hand I have another letter saying there is £129 overdue. It says they have disconnected him and if he doesn’t pay this money they are going to take him to a debt collection agency.

“They just don’t seem to understand. I have tried and tried to get it through to them. The contract needs to stop. How much clearer can I make it to them? What more can I do? How dare they put me and my sons through this after all we have been through already? I wouldn’t want anyone to go through what we have gone through over the last few months. It was easier for us to bury him than sort this out.”

A spokesman for T-Mobile said there was a delay to the automated process that cancels the balance, which resulted in the letters being issued.

The spokesman added: “We apologise to Mrs Raybould for any distress caused at this difficult time. We can confirm that the account has been closed and the balance cleared.”

They are writing to Maria to apologise.

Aminah Hart and her anonymous sperm donor, Scott Andersen's, romance has moved up a notch with the announcement of their...