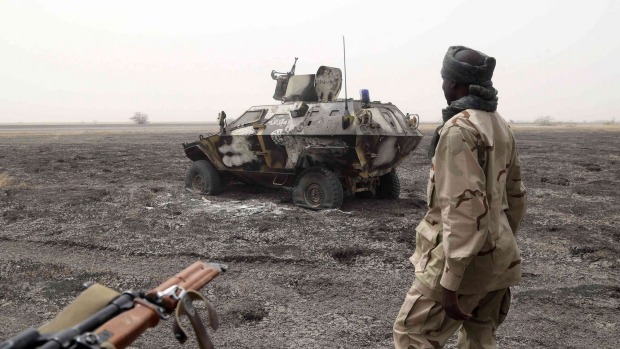 via Sydney Morning Herald:
Three suspected Boko Haram suicide bombers attacked the Chadian island of Koulfoua on Lake Chad on Saturday, killing around 30 people and injuring 80, security sources told Reuters, in one of their bloodiest strikes yet in the Central African country.

The attacks were carried out by young girls around 2 pm local time near the locality of Koulkoua, said Col. Joseph Nouma of Cameroon’s special forces, which operates in the region.

The swampy maze of islands in the border areas between Chad, Niger, Cameroon and Nigeria has become one of the main targets by Islamist militants from Boko Haram who can find easy cover in the waterways. The militants are based mostly in Nigeria but have become a wider security threat for the region.

A UN official said that there was an unspecified number of people displaced by Boko Haram-related violence on the island when the attackers struck around midday on a busy market day.

Two of the blasts rang out from the centre of the market and a third in the street as people fled.

Chad extended a state of emergency in the region last month after a double suicide attack that killed 12 people. Dozens of people were killed in multiple bombings in the border town of Baga Sola in October.

But new restrictions, such as bans on motorised canoes aimed at stopping attacks, makes it harder for aid agencies to access the roughly 60,000 displaced people living there.

“Evacuations will have to be done by the army with the assistance of non-governmental organisations and the United Nations to local healthcare centres like Bol,” said Florent Mehaule, head of the UN Office for the Coordination of Humanitarian Affairs in Chad.

He said most of the region’s displaced had arrived in April after clashes between Chad and Boko Haram in Niger and Nigeria.

Mehaule could not provide exact details of the number of displaced on the island during the attack since they have not been able to reach it for several months.

However, security sources say that logistical constraints have caused delays and there are growing signs that national armies are instead acting alone. Cameroon said it conducted a major operation along its long western border with Nigeria, killing 100 militants and freeing 900 people.

Ryan Cummings, chief analyst for Africa at crisis management company red24, said such a strategy would have limited effects.

Olympic athlete Oscar Pistorius has been found guilty of the murder of Reeva Stenkamp after a South African appeals court...