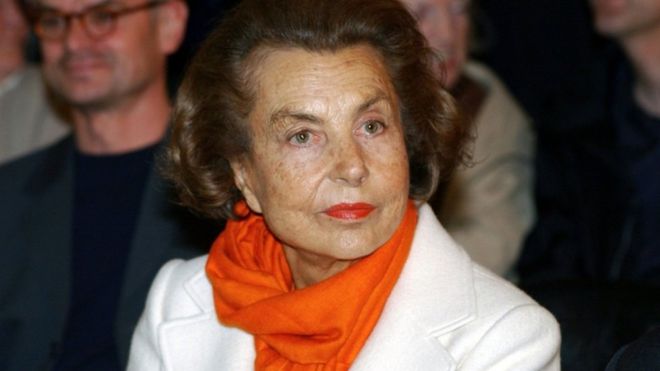 Liliane Bettencourt, heiress to the L’Oreal cosmetics empire and the world’s wealthiest woman, has died. She was 94.

Liliane Bettencourt, the heiress to cosmetics firm L’Oreal, has died aged 94, her family has confirmed.

A statement said she had died at home “peacefully” overnight.

She left the company’s board in 2012 and was rarely seen in public afterwards, but remained in the news because of a high-profile exploitation case following her dementia diagnosis.

In a statement, the company’s chairman and CEO Jean-Paul Agon said: “We all had a deep admiration for Liliane Bettencourt who has always watched over L’Oreal, the company and its employees, and who was very attached to its success and development.

“She personally contributed a lot to its success for very many years. A great woman of beauty has left us and we will never forget her.”

The heiress became embroiled in a public feud with her estranged daughter, Francoise Bettencourt-Meyers, in 2007.

Ms Bettencourt-Meyers filed a lawsuit over concerns that her mother was being exploited by members of her entourage amid declining health.

It was revealed in 2008 that a photographer who had befriended the heiress, François-Marie Banier, was gifted items worth hundreds of millions of dollars – including paintings by Picasso and a 670-acre island in the Seychelles.

Ms Bettencourt-Meyers said she took legal action against Mr Banier after learning from her mother’s household staff that she was allegedly considering adopting him.

The mother and daughter reconciled their relationship in 2010, and a French judge ordered Ms Bettencourt be put under the guardianship of her family a year later because of her failing health.

But the family exploitation case then escalated to a political scandal after it was claimed that Ms Bettencourt’s financial manager, Patrice de Maistre, had extracted money from her to go towards former French President Nicolas Sarkozy’s 2007 election bid.

The alleged illegal funding was investigated, although Mr Sarkozy consistently rejected all accusations of impropriety and French prosecutors dropped all charges relating to him in 2013.

The rest of the exploitation case was eventually resolved in May 2015 when eight people, including Mr Banier, were convicted and instructed to pay millions in damages to the family.
The L’Oreal empire

Ms Bettencourt’s assets, including her holding stake in the cosmetics company, were placed in a trust controlled by her daughter.

One of her two grandchildren, Jean-Victor Meyers, succeeded her on L’Oreal’s board as vice chairman, and was named to guard her personal affairs.

Her father, Eugène Schueller, founded a hair dye company in 1909, which then turned into the L’Oreal group.

It is now the world’s largest cosmetics company.

The sixth series of the reality show continues on ITVBe tonight, September 11, at 10pm, with the first episode. more