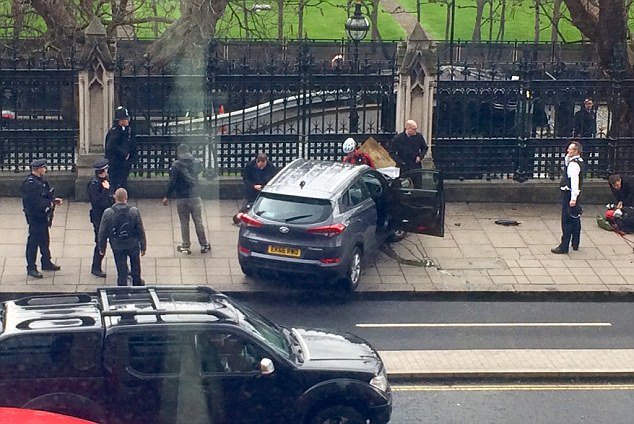 Four people, including an armed police officer and a man believed to be the attacker, have died in a terror attack near the Houses of Parliament.

One of the victims was among several pedestrians hit by a car on Westminster Bridge, before it crashed.

An officer protecting Parliament was stabbed by an attacker, who was then shot by police.

At least 20 people were injured, including three other officers. The attacker has not yet been identified.

Acting Deputy Commissioner and head of counter terrorism at the Metropolitan Police, Mark Rowley, said a major investigation was under way into the “marauding terrorist attack”.

He said emergency services were called at 14.40 GMT after the car was driven over Westminster Bridge, hitting and injuring a number of members of the public and the three police officers, who were on their way back from a commendation ceremony.

After the car crashed into the railings of the Houses of Parliament, a man armed with a knife “continued the attack” and tried to enter the building.

He said it was believed there was only one attacker, but “I am sure the public will understand us taking every precaution in locking down and searching the area as thoroughly as possible”.

The Real Housewives Of Cheshire Renewed For Season 5 & 6!

The Real Housewives Of Cheshire has been renewed for a fifth & sixth installment with both set to air in...