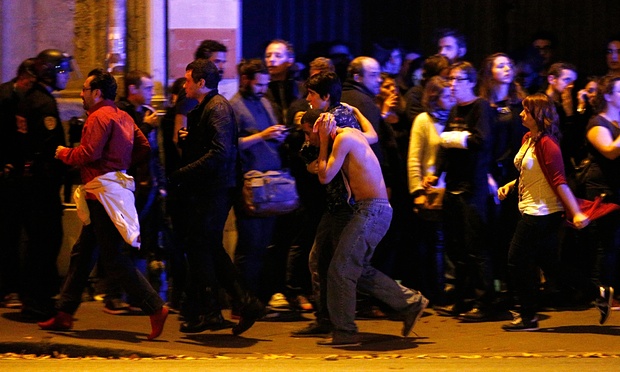 via The Guardian:
At least 120 people have died in Paris in a wave of coordinated gun and suicide bomb attacks, prompting the French president, François Hollande, to declare a state of emergency and tighten controls on the country’s borders.

In the deadliest terrorist attack on Europe since the 2004 train bombings in Madrid, six venues across Paris were targeted: gunmen opened fire at a rock concert and on patrons in restaurants; and a series of bombs were detonated near the Stade de France, where the national side was playing Germany in an international friendly football match.
Paris attack witness: ‘he was dressed in black, professional, shooting and killing’

At least eight attackers are dead, seven of them in suicide bombings, but witnesses to one shooting said police told them at least one attacker was still at large.

In the bloodiest incident, 87 people were reported killed inside the Bataclan concert venue in the 11th arrondissement, when gunmen opened fire on the crowd during a concert by US rock group Eagles of Death Metal.

Many people in the crowd were reportedly held hostage before armed police stormed the venue. Some of those inside the Bataclan theatre told reporters three of the terrorists detonated suicide belts as the French security forces closed in.
Live Paris terror attacks: eight attackers dead after killing at least 120 people – live updates
Latest coverage of the attacks across Paris that have left at least 120 people dead
Read more

Police reported six attacks occurred across Paris over a little more than two hours on Friday night. Incidents occurred at:

Earlier reports suggested up to 157 people had been killed, before the Bataclan death toll was significantly revised down.

In addition to those killed, across the city, a further 200 people were injured, at least 80 of them seriously.

Paris prosecutor François Molins said at least eight attackers had been killed across the city, seven of them in suicide bombings.

However, one witness told the Guardian that officers had warned him at least one of the terrorists had still not been apprehended.

Psychotherapist Mark Colclough, a British and Danish national, was standing near a cafe on the Rue de La Fointaine au Roi in the 11th arrondissement when a gunman opened fire on patrons inside.

“He [the attacker] was standing in a shooting position. He had his right leg forward and he was standing with his left leg back. He was holding up to his left shoulder a long automatic machinegun – I saw it had a magazine beneath it.”

Colclough said the man was left-handed and shooting in short bursts. “It was fully intentional, professional bursts of three or four shots.”

“If you think of what a combat soldier looks like, that is it – just without the webbing. Just a man in military uniform, black jumper, black trousers, black shoes or boots and a machinegun.”

Colclough said police told him the killer he saw had not been caught.

“We were taken to the police station to give a witness statement. The gunman we saw has not been apprehended. They [the police] confirmed that on the way out. We asked if it was safe to walk home and they said definitely not.”

The attacks come 10 months after 20 people died during attacks by Islamist gunmen on the offices of the satirical magazine Charlie Hebdo, located close to the Bataclan theatre, and a kosher supermarket in Paris.

Hollande, who was at the football match at the Stade de France at the time of the bomb blasts, cancelled plans to attend this weekend’s G20 summit in Turkey and convened a cabinet meeting. In a TV address to the nation, he declared a state of emergency, and closed the country’s borders.

“This is a terrible ordeal that again assails us,” he said. “We know where it comes from, who these criminals are, who these terrorists are.”

He said the attackers wanted “to scare us and fill us with dread”, but warned France’s retribution would be swift and unflinching.

“We are going to lead a war which will be pitiless. Because when terrorists are capable of committing such atrocities they must be certain that they are facing a determined France, a united France, a France that is together and does not let itself be moved, even if today we express infinite sorrow.”

The state of emergency would be in force across the country, Hollande said, meaning some places might be closed and people searched. He said: “The second decision I have made is to close the borders. We must ensure that no one enters to commit any crimes and that those who have committed the crimes that we have unfortunately seen can also be arrested if they should leave the territory.”

The events brought immediate international condemnation, with the US president, Barack Obama, calling it “an attack on all of humanity and the universal values we share”.

Obama said he did not want to speculate on who might have carried out the attacks, but said the US was ready to help “our oldest ally”. “Those who think they can terrorise France or their values are wrong,” he said. “Liberté, égalité and fraternité are values that we share, and they are going to endure far beyond any act of terrorism.”

The German chancellor, Angela Merkel, said she was “deeply shaken by the news and pictures that are reaching us from Paris.”

British prime minister David Cameron, who is still expected to travel to the G20 summit, said he was shocked by the events. “Our thoughts and prayers are with the French people. We will do whatever we can to help.”

At the Bataclan theatre, concertgoer Julien Pearce said he saw two or three men armed with Kalashnikov-type rifles burst in midway through the concert and begin “shooting blindly at the crowd” for several minutes.

“Everyone was running in all directions towards the stage,” he said. “It was a stampede and even I was trampled on. I saw a lot of people hit by bullets. The gunmen had loads of time to reload at least three times. They weren’t masked; they knew what they were doing; they were very young.”

As the massacre unfolded inside, hundreds of officers carrying machineguns surrounded the building before storming it.

Marc Coupris, 57, still shaking after being freed from the Bataclan theatre said “It was carnage.”

“It looked like a battlefield, there was blood everywhere, there were bodies everywhere. I was at the far side of the hall when shooting began. There seemed to be at least two gunmen. They shot from the balcony.

“Everyone scrabbled to the ground. I was on the ground with a man on top of me and another one beside me up against a wall. We just stayed still like that. At first we kept quiet. I don’t know how long we stayed like that, it seemed like an eternity.”

A man running down the street from the theatre told reporters, “it was horrible, there were so many corpses, I just can’t talk about it.”

The French TV station BFMTV said the gunmen who attacked the theatre had shouted “It’s for Syria” before opening fire.

Images taken by people living near the Bataclan showed bodies in the street, covered by sheets thrown down by local residents.

One witness, Anna, who lives near the Bataclan, said they heard firing and threw themselves on the ground.

In a shaky voice, she told BFMTV. “We saw people running and people with guns. The whole area is sealed off. We don’t know what is happening here. Oh my god, there’s a body there. This is horrible.”

Charles Mackenzie, 67 & his wife, Dorothy Mackenzie, 63, had travelled to Mexico to attend their daughter’s wedding has been...