Home » News » “Got Her Father’s Fair Skin, Good On Her!” Sam Armytage Congratulates A Mixed Parentage Twin On Her Fair Skin

“Got Her Father’s Fair Skin, Good On Her!” Sam Armytage Congratulates A Mixed Parentage Twin On Her Fair Skin

A petition has been launched asking for Australia’s Sunrise’s Samantha Armytage to apologise for comments she made on-air last month, dubbed by some viewers as racist.

The 37-year-old interviewed non-identical twins, Lucy and Maria Aylmer, who have become a sensation around the world due to their differing skin tones.

“Maria has taken after her half Jamaican mum with dark skin and brown eyes and curly dark hair, but Lucy got her dad’s fair skin, good on her, along with straight red hair and blue eyes.” 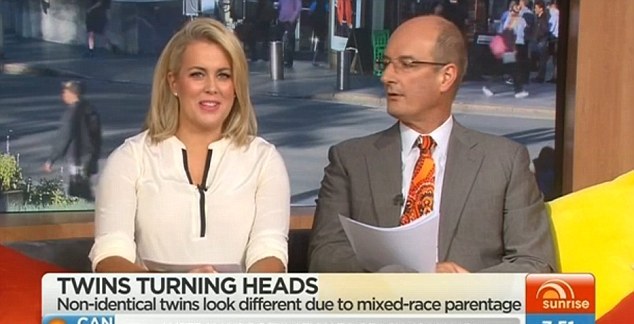 Co-host David Koch seemed to be taken aback by the comment, taking a quick confused glance in Sam’s direction.

Sam and Sunrise vehemently deny the claims of the petition, with a Seven spokesperson stating:

“Regular members of the Sunrise audience or anyone who has seen the clip in full will know that Sam was taking a dig at herself. She frequently jokes about the fair skin that runs in her family and difficult it can be to manage in extreme environments.”

We came across this video of a man who many believe to be Paul Charles Dozsa. Depending on who you...