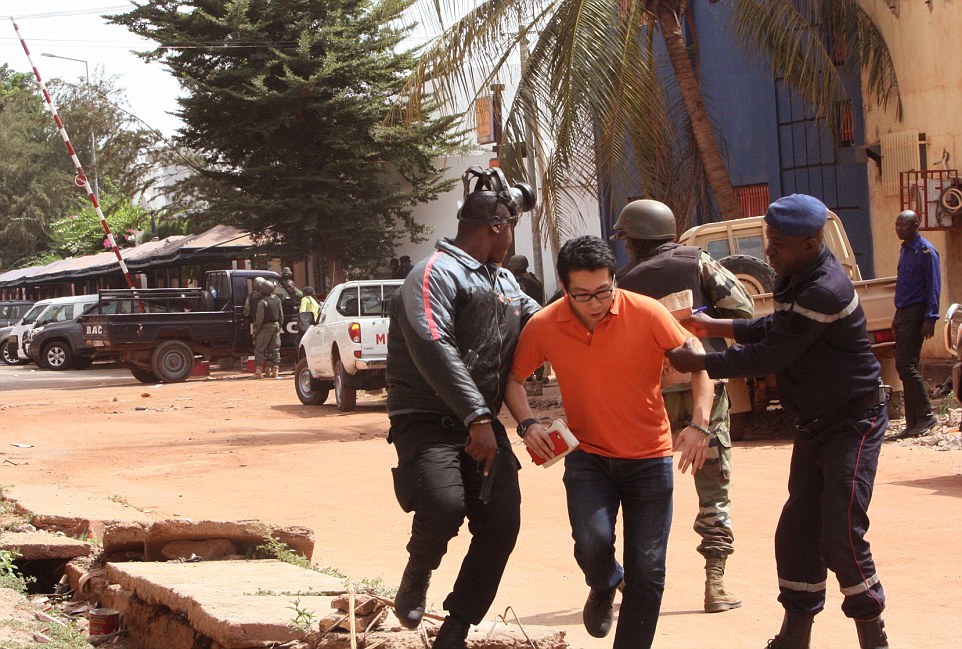 Security personnel escort a hostage from the hotel

via Daily Mail:
Armed jihadists have killed at least 27 people in a deadly shooting rampage after taking 170 hostages at the Radisson Blu hotel in Bamako, Mali.

Automatic weapons fire was heard on the seventh floor of the 190-room hotel, where it was thought as many as 10 militants roamed through the building, looking for guests and members of staff. All the remaining hostages have since been freed.

Among the victims were Belgian diplomat Geoffrey Dieudonne and a French national, with the initial death toll likely to rise.

All 22 American nationals were rescued unharmed but 12 bodies have been found in the hotel’s basement and a further 15 victims were discovered on the second floor by rescuers.

Three of the gunmen have been killed while the remaining terrorists have taken up positions on the hotel’s roof as rescue forces, led by US Special Forces, try to finish off the gunmen. The al-Qaeda affiliated group Al-Mourabitoun, based in northern Mali, have claimed responsibility for the attack.

Several witnesses have claimed that the gunmen entered through the gates of the hotel in a car with a diplomatic number plate before opening fire with AK-47s and throwing grenades inside the building. The gunmen were also speaking to the hostages in English, according to one freed hostage.

‘I heard them say in English ‘Did you load it?’, ‘Let’s go,’ revealed Guinean singer Sekouba ‘Bambino’ Diabate, who was freed by Malian security forces.

‘I wasn’t able to see them because in these kinds of situations it’s hard. I woke up with the sounds of gunshots and for me, it was just small bandits who came in the hotel to claim something. After 20 or 30 minutes, I realized these are not just petty criminals,’ said Mr Diabate.

The hotel’s head of security, Seydou Dembele, said two private security guards had been shot in the legs in the early stages of the assault.

‘We saw two of the attackers. One was wearing a balaclava. The other was black-skinned. They forced the first barrier,’ Dembele told Reuters.

Within minutes of the assault, police and then soldiers had surrounded the hotel and were blocking roads leading into the neighbourhood.

Belgian diplomat Geoffrey Dieudonne was among two Malians and one French national who were confirmed dead following the siege.

Mr Dieudonne, an official with the parliament of Belgium’s French-speaking community, had been in Mali for a convention when he was killed in shocking terror attack.

‘Mr Dieudonne, with other foreign colleagues, was in Mali to give a seminar for Malian parliamentarians. At this stage the exact circumstances of his tragic death are not yet known,’ the Brussels-based parliament said.

At least 27 bodies were counted by one UN peacekeeper as Mali’s security minister confirmed the gunmen are holding no more hostages.

Dozens of officers standby outside the main building, special forces clear the building

2 suspected terrorists dead in Saint-Denis after woman blows herself up, another was shot by police sniper. 1 suspect still...