An American teenager, Gabrielle Turnquest has become the youngest person in more than 600 years to become a qualified barrister in England and Wales. Gabrielle is 18-years-old. The average age a lawyer passes the Bar Professional Training Course is 27. Gabrielle was called to The Bar last month through the Honourable Society of Lincoln’s Inn after passing her Graduate Diploma in Law at the University of Law when she was just 17.

Gabrielle plans on returning to the United States this autumn to set the multi-state Bar and to start a career as a fashion law specialist.

If Gabrielle was to work in the UK, she would have to carry out a pupillage at a chambers for a further year before being granted a tenancy. But she is also called to the Bahamas Bar, her parents’ place of birth, and hopes to work there also.

She told the Daily Telegraph: ‘I am honoured to be the youngest person to pass the Bar exams but, really, I was not aware at the time what the average age was. I didn’t fully realise the impact of it.’

Gabrielle made history previously, at Liberty University in Virginia, where she became the youngest student to gain an undergraduate degree, in psychology, at the age of just 16. 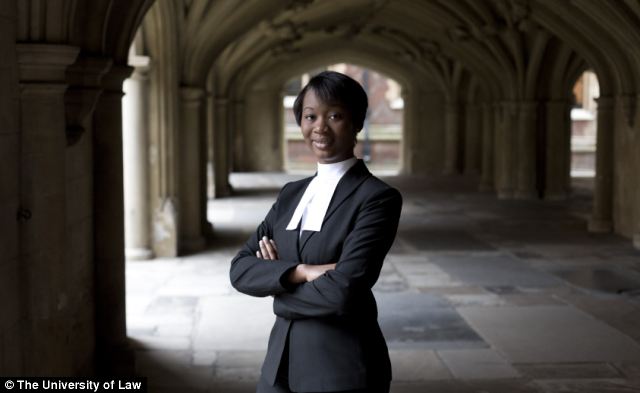 Trainee lawyers did have to be at least 21 to be called to The Bar before a change in the law in 2009. Now that she’s passed, Gabrielle is to attend the Fashion Institute of Design and Merchandising in a bid to break into the niche market of fashion law.

Nigel Savage, President and Provost at The University of Law, said: ‘Like Gabrielle, students from across the globe are recognising the importance of having a legal qualification that is widely recognised in other legal jurisdictions. The growing globalisation of law firms and the need for more international expertise means that it is becoming increasingly more important for young legal professionals to have experience across different legal markets if they are going to maximise the number of job opportunities that are available to them.’

Actress Thandie Newton and husband Ol Parker are expecting their third child. The news was announced as she walked the...